Brazil has sent its first man into space.

It's interesting that a person who speaks Portuguese has finally made it into space, given how prolific Portugal was in exploring and conquering the globe in the 15th and 16th centuries. But, times do change. After all, who would have thought that, forty years after the race to the moon, the Americans and the Russians would be working so closely together in space exploration.

The American space program has depended on the Russians for cargo and astronaut delivery to the space station since the Columbia explosion. The shuttle Discovery visited the station in July but had problems with the foam insulation on its external fuel tank.

[American astronaut Jeffrey] Williams praised the cooperation between the Russians and the Americans, saying the two countries were united by the common vision of space exploration and by the goal of keeping a permanent presence in orbit following the Columbia accident.

“I think the partnership is stronger because of it,” he said.

[Russian cosmonaut Pavel] Vinogradov said that, in space cooperation, the Russians and Americans “have learned to work together.”

Good to hear from former enemies.

UPDATE: Boy, I can't add or subtract. I have corrected this post to say that the space race was forty years ago, instead of the thirty I had originally put. Great math skills, huh?
Posted by Albatross at 8:11 PM No comments:

There's nothing romantic about the Mafia.

Police said that Giovanni had shown no remorse, admitting: “I shot her, I shot my sister . . . She had a child by a man she was not married to.

“It is a question of honour. I would have shot her in the back, but she turned round. I am not sorry. On the contrary, I am proud of what I did.”

He said that he had waited until she had had her baby because under the Mafia code “you don’t kill pregnant women”. [emphasis added]

This turns my stomach. I don't think I even want to watch The Godfather movies anymore.
Posted by Albatross at 8:53 PM No comments:

Researchers are now analyzing data from the test, focused on the last six seconds of flight prior to impact when the scramjet may have reached Mach 8—eight times the speed of sound, or nearly 8,000 kilometers per hour. That's about 10 times faster than a conventional jet.

Posted by Albatross at 8:26 PM No comments: 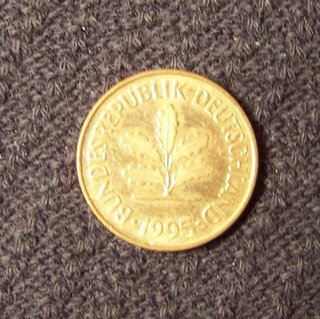 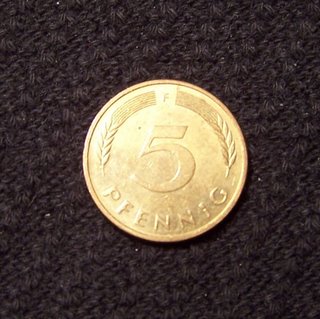 Nothing but a coin from Deutschland.
Posted by Albatross at 5:07 PM No comments:

Glenn Reynolds has an interesting discussion about whether casualities in Iraq are mounting, falling, or even receding. Of course, it's all semantics and context.

But yes, although "casualties," being additive, are always going to "mount" over time barring new improvements in resurrection technology, the casualty rates are falling, something the "mounting casualties" language obscures.

All in all, the U.S. military does not get a good break in the U.S. media. Too bad. Good soldiers should get as much press as the bad ones do.
Posted by Albatross at 11:00 AM No comments:

Setting a standard for others

Director George Lucas is worried about American "cultural imperialism." In a speech to the World Affairs Council in San Francisco on Wednesday, he cited the lifestyles portrayed on "Dallas" as an example of how Hollywood irresponsibly infects the minds of poor people overseas. [emphasis added]

Apparently, Ewoks are OK to emulate, though. That's responsible infection.
Posted by Albatross at 5:53 PM No comments:

Strangest headline of the day

Who told it to look for him anyway?
Posted by Albatross at 9:39 PM No comments:

Here's a cool photo of one of our soldiers keeping an eye out for the terrorists. 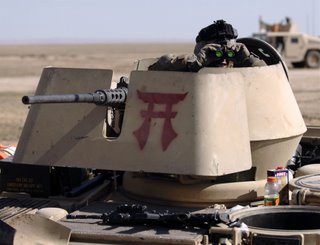 Does anyone know what the character painted on the turret means or stands for? It certainly is cool-looking, and enigmatic.

Photo courtesy of the U.S. Army, by Staff Sgt. Alfred Johnson.
Original caption: A Soldier from 2nd Battalion, 9th Cavalry Regiment searches for insurgents from the turret of his M2A2 Bradley Fighting Vehicle during Operation Swarmer, northeast of Samarra, Iraq. This photo appeared on www.army.mil.
Posted by Albatross at 9:26 PM No comments:

This is way cool, especially the way the payload was launched into space.

The 55-pound (24.75-kilogram) Space Technology 5 satellites, which will test new technologies for future science missions, were carried aloft from Vandenberg Air Force Base aboard a Lockheed L-1011 jet.

Shortly after 6 a.m. PT (9 a.m. ET), when the plane reached 39,000 feet (11,700 meters), a compact Pegasus rocket dropped from the aircraft's belly, fired its engine and ferried the satellites on a 10-minute climb into space.

Here's to more innovations as we head out to the stars.
Posted by Albatross at 4:55 PM No comments:

Protesting an idea to make the country stronger

In case you hadn't heard, French youth have been rioting and destroying a McDonald's (?) to protest a new labor law that would make their jobs more liable to termination by companies. How liable? Here:

The law would allow businesses to fire young workers in the first two years on a job without giving a reason, removing them from protections that restrict layoffs of regular employees.

Companies are often reluctant to add employees because it is hard to let them go if business conditions worsen. Students see a subtext in the new law: make it easier to hire and fire to help France compete in a globalizing world economy. [emphases added]

Wow. It's a good thing the French youth don't live in Texas. In this state you can be fired for practically any reason at any time. Quite an incentive to do a good job and make the boss happy.

But, the rioters obviously don't have any respect for competition or doing anything to improve their economy beyond collecting a paycheck. Seriously. Here's how one group of radicals proposes increasing the well-being of their nation:

In Marseille, extreme leftist youths climbed the facade of City Hall, replacing a French flag with a banner reading "Anticapitalism."

In other words, "Kick out the capitalist pigs and our jobs will be secure." Except, who would they work for, then?

No word on whether the protesters are largely immigrants or even Muslim, but this quote is suggestive of the answer:

Youth joblessness stands at 23 percent nationwide, and 50 percent among impoverished young people. The lack of work was blamed in part for the riots that shook France's depressed suburbs during the fall.

There is one upside to this news article, though. At least only four cars were burned in Paris.
Posted by Albatross at 8:58 PM No comments: 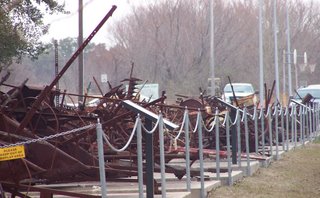 Nothing but a bunch of historic farming tools on display.
Posted by Albatross at 8:47 PM No comments:

Neverminding the headline for the article, this should be cool.

The Space Technology 5 mission, which is expected to shake down microsatellite technologies for future missions to track space weather, has just a 20 percent chance of rocketing spaceward from an air-based mothership due to poor weather conditions expected for its March 14 launch target. ...

The microsatellites that are to be launched will be doing some important research, but the launch method for the rocket is so different from the traditional Roman-candle ride into space that it is exceptionally cool.

I wish NASA good luck on the launch.
Posted by Albatross at 8:47 PM No comments:

Finding there is something new under the sun ...

PARIS - A team of American-led divers has discovered a new crustacean in the South Pacific that resembles a lobster and is covered with what looks like silky, blond fur, French researchers said Tuesday.

Scientists said the animal, which they named Kiwa hirsuta, was so distinct from other species that they created a new family and genus for it.

It's stunning to realize that, after all these centuries and generations on this planet, we are still discovering new creatures and amazing things and interesting possibilities. Our world is spectacular, and humanity can accomplish great things once we set our minds to the task. It is unfortunate that so many people try to distract our minds from effecting positive developments, choosing instead to punish the thinkers for such small offenses as mere offense.
Posted by Albatross at 7:10 PM No comments: 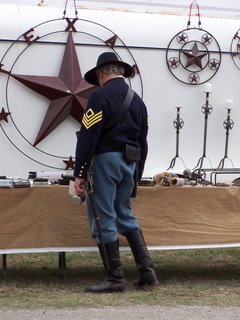 Nothing but a man dressed as a Union soldier looking at some crafts.
Posted by Albatross at 5:50 PM No comments:

Corniest headline of the day

Beginning today, visitors to the Kansas Cosmosphere and Space Center in Hutchinson may find themselves moved to a more a reverential state of mind.

Unveiled during a private ceremony Tuesday night, the Cosmosphere's latest addition is an 8- by 11-foot (2.4- by 3.3-meter) stained glass creation that pays tribute to 17 fallen astronauts.

What an incredible melding of the scientific, the artistic, and the religious. The stained glass piece is actually quite breathtaking.
Posted by Albatross at 5:22 PM No comments: