.
So, I'm watching "The Greatest Ever" on the Military Channel, and the show is about the ten greatest tanks ever built.

And guess who I see on the show. 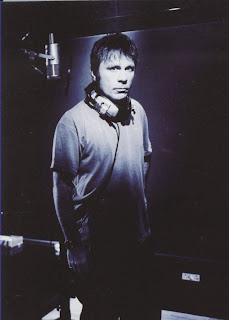 That's right, the lead singer of Iron Maiden happens to own one of the greatest tanks ever built, a Russian T-34, and they had him on this awesome show driving his very own tank through a mud field! The show even listed him on the title bar as "Rock Star/Tank Owner."

Then again, Bruce Dickinson himself is just pretty cool all around, including having a decent second career as a pilot.
Posted by Albatross at 7:19 PM No comments:

.
The claim may be spot on.

The badness is galactic.
Posted by Albatross at 9:49 PM No comments: 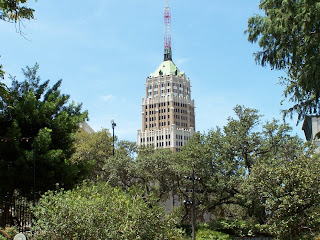 High rise, green and blue.
Posted by Albatross at 8:45 PM No comments:

.
The functional meets the decorative and the natural, fuzzy. 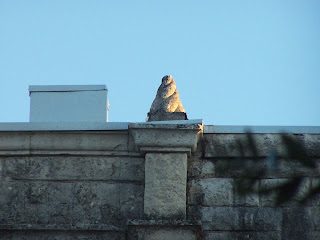 Posted by Albatross at 4:43 PM No comments:

.
My previous post mentioned Sergei Prokofiev's Alexander Nevsky as a means to explain how I had come across a musical piece that had been in my CD collection for many years but that I hadn't actually listened to until just a week ago. Now I'd like to look more closely at Nevsky itself.

The work is a cantata that was taken from the musical score Prokofiev wrote for a 1938 film of the same name directed by Sergei Eisenstein. Rather than rehash all the great descriptions of the work that are already floating around out there, I thought I would just reproduce an excerpt from the liner notes of the Chicago Symphony recording that was done under the direction of Fritz Reiner:

Alexander Nevsky deals with the Russian defense of Novgorod in 1242 against the invading Knights of the Teutonic Order. Prince Alexander Nevsky, through the power of his personality alone, gathered an enormous army and met the enemy on the frozen waters of Lake Chud. There he dealt them a humiliating defeat, thus saving his country from the brutality threatened by the German horde. (The film was made one year before the signing of the Soviet-Nazi pact, and sentiment in Russia was at that time violently anti-German.) With this epic and heroic tale as a pivot, Prokofiev created a score that equaled in every degree the dynamism and vitality of Eisenstein's movie.

That's a pretty good description of the work. And now, here are some bits from each movement that should give you a good sample of what Nevsky is all about. (These excerpts are from the recording of Charles Dutoit leading the Montreal Symphony.)


I. Russia Under the Mongolian Yoke
This movement is intended to depict a battered landscape, a Russia that has been devastated by the Mongols. The music is desolate and sear, suggesting hopelessness and despair. Interesting that the piece opens with this mood.

II. Song About Alexander Nevsky
The Russians sing of past military glory, and they call on the people to prepare for the next threat. A very martial sound, stirring and inspiring. Appropriate for a call to arms.

III. The Crusaders in Pskov
The Teutonic Knights enter Pskov to the sound of ominous, doom-filled music. Imagine Darth Vader in medieval armor riding a dark horse, make it darker, and then you will have pretty decent picture to go along with such threatening music. The lyrics here are in Latin to reflect the Roman Church's influence over the knights, and their English translation is (roughly) "As a foreigner, I expected my feet to be shod with cymbals."

IV. Arise, Ye Russian People
Now with the invaders in Pskov, the Russian folk are urged to run to battle. Patriotic and grand, the music underscores the urgent call to defend the motherland.

V. The Battle on the Ice
The battle begins, and the forces clash on a frozen lake. Chaos and mayhem rule, and the Teutonic (German) theme comes back to duel with the Alexander Nevsky (Russian) theme first presented in second movement. The Russians are victorious, and the Teutons sink beneath the frigid waters of the lake.

VI. Field of the Dead
After the battle, a lonely woman walks the field of the dead. She mourns the passing of the brave soldiers, but she also praises their fighting spirit, and the music is appropriately somber. Strange that this is called the Field of the Dead given that the battle took place on a frozen lake.

VII. Alexander's Entry into Pskov
Victorious, Alexander Nevsky returns to Pskov to receive the praise and adulations of the people. The music is celebratory as the Russians sing songs of rejoicing.

A grand piece, and one of my favorites. If you like this kind of robust, boisterous classical music, I suggest you get your own copy of Alexander Nevsky and listen to it over and over again. I don't think you will be disappointed.

P.S.: Just remember to get a recording where the lyrics are sung in Russian! Much better than that weird version by Fritz Reiner where they sing in English!
Posted by Albatross at 6:34 PM No comments:

.
I recently came across a gem in my music collection, a little treasure that I didn't even know I had. Here is a sample:

That is the overture to Russlan & Ludmila, an opera by Mikhail Glinka. It's not the most inspired piece in the repertoire, but it is fun to listen to, as many overtures are.

So, why didn't I know that I had this piece? Because it is an extra on a CD that I bought a long time ago, a disk that was made to showcase another, grander work that I decided I didn't care for enough to even finish listening to the rest of the CD.

Allow me to explain:

Many years back I discovered a piece by Sergei Prokofiev called Alexander Nevsky. This work is a cantata put together by Prokofiev and based on music he composed for a 1938 Russian film of the same name. I’ve never seen the movie, but the cantata is breathtaking. After hearing some of the music on a sampler, I went out and bought this CD featuring the Montreal Symphony performing under the direction of Charles Dutoit. 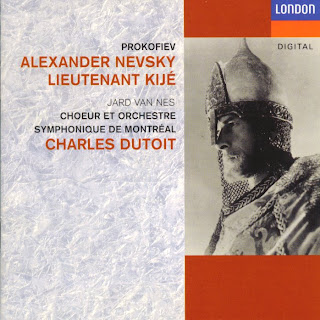 I thoroughly enjoyed it at the time, and I still do.

But I needed another recording. You see, I have a habit of buying at least one other recording of a piece I enjoy very much just to get a different interpretation of it. Different conductors, performers, and orchestrations imbue new character to familiar pieces, and I feel I get to know a work better by hearing it in a new version. So I bought this CD, which is Fritz Reiner’s take on Alexander Nevsky using the Chicago Symphony. 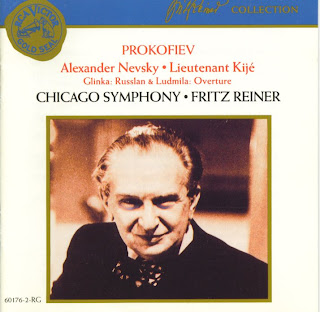 And I was sorely disappointed.

For one main reason: the lyrics were in English!

My concern may be nit-picky, but the work is about a Russian figure, and it was written by a Russian composer, and my first exposures to it featured Russian lyrics. To me, Alexander Nevsky should be sung in Russian, and I found it oddly unsettling to hear the lyrics in a language I understood! It’s weird, but I was totally turned off to Reiner’s version, and I put aside the CD in a fit of pique and forgot about it.

But, in doing so, I missed out on the Glinka overture!

See, in the world of classical music recordings, albums that feature longer, broader works are often rounded out with a “bonus” work, a short piece that is somewhat in the same character and really just functions as filler for the end of the recording. These are often overtures for ballets or operas, and that’s what RCA Victor chose to put at the end of the Reiner recording. But, since I had never listened to the whole CD all the way through, I never actually heard the piece.

Until this past weekend.

I came across this CD again while going through my collection, and for some reason I decided to listen to the whole thing. To my surprise, the English lyrics didn’t bother me as much as they used to, and I found myself liking this version just as much as the original CD I bought. But even more pleasing than that is I got all the way through to the last track and listened to the Russlan and Ludmila overture for the first time. And I was happy to hear it.

I didn’t write this long post to say how great the Glinka piece is. It’s fun, but it’s not spectacular. No, I wrote this to remind myself that I need to pay a little more attention to things and to not write off the whole for one bad bit. You never know what gems you will find that way.
Posted by Albatross at 9:33 PM No comments:

.
Here is a new image of Victoria Crater on Mars taken by HiRISE. 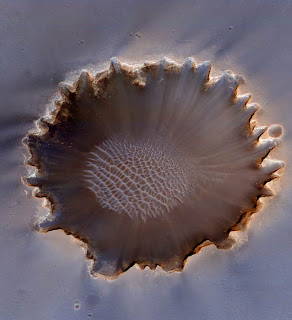 Image courtesy of NASA/JPL-Caltech/University of Arizona. Story at Space.com here.

Posted by Albatross at 1:14 PM No comments:

.
Leave it to T-Rex to find the silly in serious science. (Click to expand comic.)

A crazy Friday night, indeed. Especially when aliens are involved.
Posted by Albatross at 10:12 PM No comments:

Looking at a meteorite 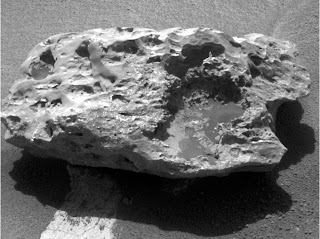 That rock is called Block Island, and NASA has just confirmed that it is, indeed, a meteorite.
Posted by Albatross at 8:19 PM No comments:

.
John Donne was a very religious man. And he was a spectacular writer who put together poetry that was groundbreaking in his day and still ripe for analysis in this age. Here, today, is one of his Holy Sonnets, one of many complex pieces that illustrate his relationship with God.

This poem was written in 1633. The placements of the commas and apostrophes are accurate, and they demonstrate how poets used to struggle to maintain meter in their works. In this case, as in many poems of the age, the meter is iambic pentameter.

Batter my heart, three-personed God; for You
As yet but knock, breathe, shine, and seek to mend;
That I may rise and stand, o'erthrow me,'and bend
Your force to break, blow, burn, and make me new.
I, like an usurped town, to'another due,
Labor to'admit You, but O, to no end;
Reason, Your viceroy'in me, me should defend,
But is captíved, and proves weak or untrue.
Yet dearly'I love You,'and would be lovéd fain,
But am betrothed unto Your enemy.
Divorce me,'untie or break that knot again;
Take me to You, imprison me, for I,
Except You'enthrall me, never shall be free,
Nor ever chaste, except You ravish me.