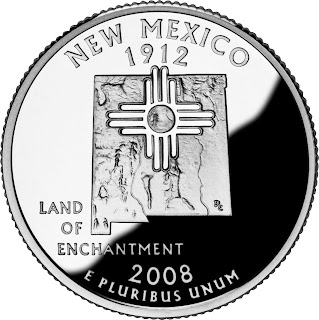 Good job, New Mexico. You took your simple state outline (those little jags in the lower left save it from being a simple rectangle) and you superimposed upon it that cool-looking sun symbol. You could have left off the state nickname, because it's kind of lame, but overall this is a very nice design. Simple, yet bold and iconic.

Arizona really was a gas. And it's next.
Posted by Albatross at 5:15 PM No comments: 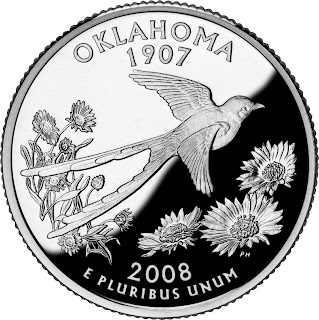 [Full disclosure: I am a Texan. This review may be biased.]

Just kidding, Oklahoma! I love ya! You're a great state, with your prairies and tornadoes and Sooners and Broadway-musical-inspiring ways and proximity to Texas! It's just ----- it's just ---- well, you put that bird on your quarter. A scissortail flycatcher, accented by pretty flowers.

Do I really need to make the point again?

Next: New Mexico
Posted by Albatross at 5:01 PM 1 comment: 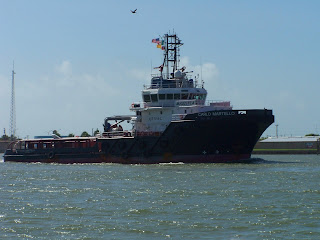 Where do you suppose it's going?

Did you know it has its own press release online?

The vessel is the twin of the tug Carlo Magno, so far the flagship of the deep-sea tug fleet. The vessel has the innovative "UT 514 L", developed specifically by Rolls Royce to meet the precise requirements of the company, it runs on heavy fuel oil, a solution that turned out to be particularly competitive in the case of the Carlo Magno.

The Carlo Martello has a power of 12,000 BHP, a bollard pull of around 150 tons and a speed of over 15 knots. The vessel is equipped with R.I.N.A. Fire Fighting 1, with an autoprotection system which can be used for salvage services.

Get to work, buddy.
Posted by Albatross at 6:13 PM No comments: 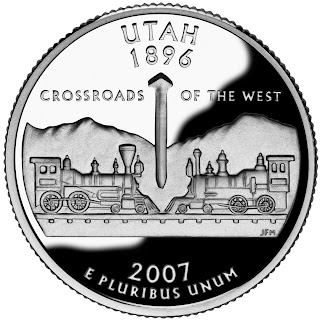 When I first saw this quarter, it took me a while to figure out what was going on. I saw the trains and realized the importance of the railroad to the American West. I saw the mountains and thought, OK, Utah has mountains. And then I was trying to figure out what city in Utah has that tower as part of its skyline. I thought of Salt Lake City, but I couldn't remember anything about a significant tower in that city, especially not one set against the backdrop of a mountain range. Then I thought of ---- OK, well, the only city I could think of was Salt Lake City. But still, what is with that tower? Why is that giant spire rising from the mountains of Utah to cast its shadow on those two trains moving to greet each other and -------

Wait. What? That's the Golden Spike? Really? That's supposed to be the ceremonial spike that joined the first Transcontinental Railroad in the United States?

Well, they could've made it look more like a spike and less like the Tower of the Americas.

Oklahoma's OK to be next.
Posted by Albatross at 5:17 PM No comments: 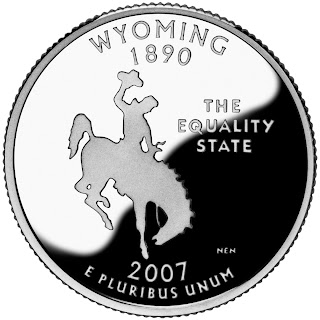 Here is an example of something great that is made lesser by something ungreat.

If Wyoming had just stuck with the silhouette of the bucking bronco, this would have been one of the best designs, hands down. That silhouette speaks to the American Wild West more than anything else, and it is an image that is widely recognized and generally accepted as a key component the cowboy culture and history.

So, what could reduce the greatness of this symbol of roughness and wildness and true grit and determination?

The state nickname: The Equality State

Utah's next.
Posted by Albatross at 7:36 PM No comments: 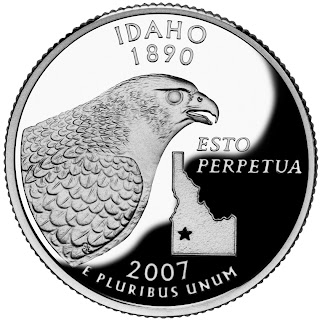 Remember what I said? Unless your state bird is an eagle, a hawk, or a falcon, it has no business being on your state quarter design?

Idaho got the message.

The only thing I would do different would be the elimination of the state motto. Other than that, this is a fine design.

Waiting for Wyoming.
Posted by Albatross at 6:05 PM No comments:

One of the reasons I like my native language so much

.
Here is a brief exchange about what form a certain English word should take. These are serious considerations, and they can be found in the comments section of this Language Log post.


A regular preterite suffix, indeed. English is so fun sometimes, even when you are serious.
.
Posted by Albatross at 3:17 PM No comments: 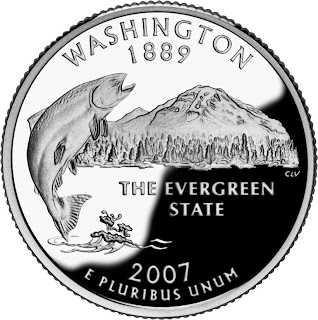 Mm. I'm disappointed. Washington could have had such a cool design for their quarter if they had kept the fish, enlarged it a bit, put it in the center, and then dumped everything else. The landscape of mountains and trees is a mess, the state nickname is just filler, and the little splashes are cartoonish and annoying.

I made the comment on the Oregon quarter review that I thought they had done a strangely good job of depicting Crater Lake and that I couldn't quite put my finger on why I liked it. Then Alan, a fellow local blogger, made a particularly keen observation that I couldn't argue with:

Idaho's in the pipe.
Posted by Albatross at 5:24 PM No comments:

CAPE CANAVERAL, Fla. – A multimillionaire's test rocket blasted off on its maiden voyage Friday and successfully reached orbit in a dry run for NASA's push to go commercial.

SpaceX's Falcon 9 rocket achieved Earth orbit nine minutes into the flight as planned, drawing praise from NASA, the White House and others eager for the company to start resupplying the International Space Station.

"This has really been a fantastic day," said an exuberant Elon Musk, SpaceX's founder. He said Friday's launch helps vindicate President Barack Obama's plan to give private companies the job of ferrying cargo and ultimately people to the space station, freeing up NASA to aim for true outer space.

I'm not a big fan of Obama (and somehow I don't think he really thought through his approach to the space program), but I'm willing to give him credit where it is due. If his edicts produce a truly viable commercial approach to space, then more power to him and to us all.
.
Posted by Albatross at 11:12 PM No comments: 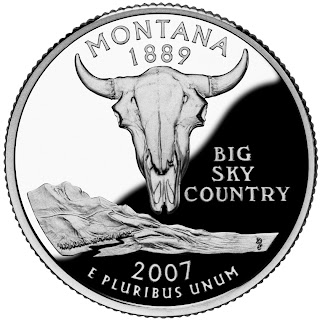 Great job, designers of the Montana quarter. You did good. You may not have a lot of people in your big state, but you've got a good eye for the symbolism. That big skull is perfect. I like it so much, I'm forgiving your inclusion of that gloopy mess below it.

Waiting for Washington.
Posted by Albatross at 8:30 PM No comments: