Well, that's a bit of a stretch. 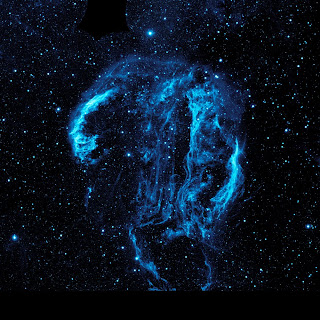 A spectacular photo from a NASA telescope has revealed a wispy blue nebula with an odd twist: It looks like a giant human head in deep space.

The head-in-space nebula photo was snapped by NASA's Galaxy Evolution Explorer satellite and shows an ultraviolet view of the so-called Cygnus Loop nebula, which is located 1,500 light-years from Earth in the constellation Cygnus, the Swan. It was released March 22 and featured this week on NASA's website.

What makes the new Cygnus Loop image striking is its odd shape. The nebula looks like a giant human head and neck, which appear in profile facing the left of the image. A bright star serves as an eye while wispy nebula gas traces the outline of jaw, and close-cropped hair.

That's an awesome image, and it's certainly worth reading about. But I just don't see it.

Guess the pareidolia ain't working for me today.
Posted by Albatross at 8:46 PM No comments:

[Gaius (Caligula)] never missed a chance of securing loot: setting aside a suite of Palace rooms, he decorated them worthily, opened a brothel, stocked it with married women and free-born boys, and then sent his pages around the squares and public halls, inviting all men, of whatever age, to come and enjoy themselves. Those who appeared were lent money at interest, and clerks openly wrote down their names under the heading 'Contributors to the Imperial Revenue'.


I was going to do an image search for "Roman prostitute", but I thought better of it. Here's an Italian dog instead: 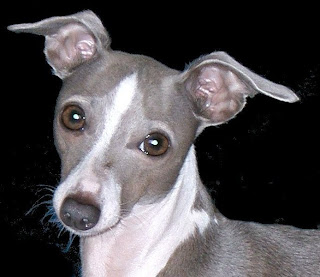 As [Julius Caesar] stood, in two minds, an apparition of superhuman size and beauty was seen sitting on the river bank playing a reed pipe. A party of shepherds gathered around to listen and, when some of Caesar's men, including some of the trumpeters, broke ranks to do the same, the apparition snatched a trumpet from one of them, ran down to the river, blew a thunderous blast, and crossed over. Caesar exclaimed: 'Let us accept this as a sign from the Gods, and follow where they beckon, in vengeance on our double-dealing enemies. The die is cast.'


This, of course, is the famous crossing of the River Rubicon, the historical border of Rome beyond which generals could not take their standing armies on pain of death. By crossing this boundary with his soldiers, Julius Caesar was committing an act of treason that was fully punishable by Roman law, and the only way to escape execution was for Caesar to depose the current government and seize control for himself. It was, quite literally, a point of no return.

Famously, Caesar did cross the Rubicon (apparently at the urging of an impetuous, musical ghost). He won Rome, set up an empire, proclaimed himself perpetual dictator, and became a force that would shape the development of Western civilization. And, in the process, he also coined a succinct and useful phrase that thrives even today.
Posted by Albatross at 8:10 PM No comments:

The future is now

And the Death Star is one step closer to reality.

The National Ignition Facility (NIF) -- a laser test facility at Lawrence Livermore National Laboratory in Livermore, Calif. -- turned on its 192 laser beams for a brief instant on March 15, unleashing a record-setting 1.875-megajoule blast into a target chamber.

The lasers were combined, gathered and focused through a series of lens into a 2.03-megajoule shot, said Ed Moses, NIF director -- a record for the facility.

That pulse of energy lasted for just 23 billionths of a second, yet it generated 411 trillion watts of power, NIF said -- 1,000 times more than the entire United States consumes at any given instant.

Seriously, though, there is a practical application for this.

In fission, atoms are split and the massive energy released is captured. The NIF aims for fusion, the ongoing energy process in the sun and other stars where hydrogen and helium nuclei are continually fusing and releasing enormous amounts of energy. In the ignition facility, beams of light converge on pellets of hydrogen isotopes to create a similar, though controlled, micro-explosion.

Because the laser is on for the merest fraction of a second, it costs little to operate -- between $5 and $20 per blast, said spokeswoman Lynda Seaver. But the potential is enormous.

NIF’s managers hope by the end of the year to reach a break-even point, where the energy released is equal to if not greater than the energy that went into the blast.

It's a tricky, dicey endeavor, what they're doing with those lasers, and I'm not sure if it violates the basic principles of physics or not. But the payoffs could be huge, especially in the power-generation industry. And isn't that what science ultimately is for?
Posted by Albatross at 9:17 PM No comments:

Well, how very nice of them.

Due to arrive Friday amid tight security during his weekend visit, Pope Benedict XVI will spend time in the state of Guanajuato, about 200 miles from Mexico City, before flying to Cuba on Monday.

Yet the area also is known as the territory of the Knights Templar and La Familia Michoacana, feuding drug cartels that also claim to have religious roots.

Both have now declared a truce in banners on display in the region ahead of the papal visit.

“I felt that they were serious and they were going to keep their word,” said Dr. Miguel Bedolla, the interim dean at the Mexican American Catholic College in San Antonio. “But, I was very surprised.”

Too bad he can't come to Mexico from now on.
Posted by Albatross at 7:55 PM No comments:

Having now won all Pompey's friends, and most of the Senate, to his side with loans at a low rate of interest, or interest-free, [Julius Caesar] endeared himself to persons of less distinction too by handing out valuable presents, whether or not they asked for them.


Shorter version: "Hey, I'm doing you a favor today. Remember that, because someday I might need a favor, too." 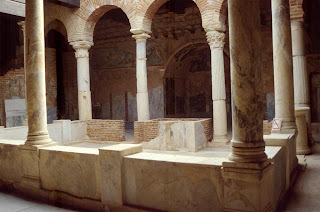 Nice place you've got here. Be a shame if something were to happen to it.
Posted by Albatross at 9:26 PM No comments:

At last a series of insulting edicts signed by Vindex must have made some impression on [Nero] ... . Only two taunts went home: a suggestion that he was a bad lyre-player, and an insulting reference to him as 'Ahenobarbus', rather than Nero Caesar. Yet he told the Senate that he intended to renounce his adoptive name, which was now being mocked, and resume that of his family; as for his lyre-playing, he replied that he could hardly deserve Vindex's taunt (which proved the other accusations just as false) after his long and painstaking cultivation of the art; and asked a number of people from time to time whether they knew of any better performer than himself.


Of course he wasn't a bad lyre-player! He knew the lyre like anyone else. Better even. He practiced!

And, he was Nero. 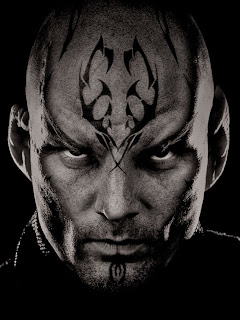 Of course he was wrong. Do you know of any better performer? Well, do you?
Posted by Albatross at 7:26 PM No comments: