"In Louisiana they skim the cream, steal the milk, hijack the bottle and look for the cow."

That's FBI agent James Bernazzani talking about corruption in New Orleans, and he seems to really have a way with an idiom. I read it in an Express-News editorial lamenting how the recovery from Hurricane Katrina is hobbled by the corruption of the local officials.

Oliver Thomas Jr., the senior member of the City Council, is the latest politician to show a greater interest in his bank account than in the people of the Big Easy.

Thomas admitted taking as much as $19,000 in bribes in exchange for helping a local businessman keep a city parking lot contract.

He is the latest in what seems to be an interminable line of corrupt politicians, including Rep. William Jefferson, D-La., the target of a multinational bribery investigation.

It's been two years since Katrina hit, and the place is still a mess. Sad.
Posted by Albatross at 8:34 PM No comments:

Just a picture of the Tower of the Americas framed by cranes. 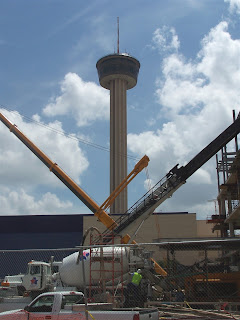 Posted by Albatross at 4:58 PM No comments:

Strange news photo of the day

What an odd photograph to illustrate news about botulism. 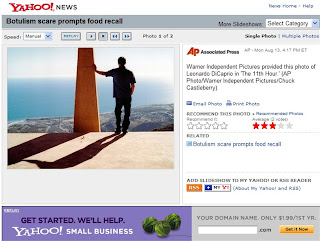 Save us, Leonardo, from the bad chili.
Posted by Albatross at 5:42 PM No comments:

BEIJING (AFP) - A giant panda first thought to be male, then classified as a hermaphrodite who was unable to bear cubs, has now surprised Chinese scientists by having twins, state media reported on Thursday.

Jinzhu had been classified as male at birth in 1996, a mistake owing to the typically small penis size of pandas, which can sometimes confuse scientists as to a panda's sex, Xinhua said.

The mix-up led to an ill-fated attempt in 2000 to mate Jinzhu with a female panda in Japan.

The two animals showed "complete disinterest" in each other, the report said.

Well, at least it makes sense, now. Scientists confused by the "small penis size of pandas". It's a wonder they can get the animals to reproduce at all.
Posted by Albatross at 4:37 PM No comments:

In the quest to save the panda from extinction, promoters play up the animal's cute qualities to encourage awareness and donations, and the media outlets happily play along. But no one should ever lose sight of the fact that pandas are still animals, and they will tear you up if you get too close.

BEIJING - A zookeeper needed more than 100 stitches after a 3-year-old panda viciously bit and scratched him during feeding time at a zoo in northwestern China, a newspaper reported Monday.

Zhang was feeding the panda from outside the enclosure, sticking his arms through the wire, when the panda, Lan Zai, grabbed his arms and began biting them and then scratched his legs, the newspaper reported.

Last October, a panda cub bit off part of the thumb of an American visitor who was feeding the animal at a reserve in southwestern China. A month earlier, a drunken Chinese tourist bit a panda at the Beijing Zoo after the animal attacked him when he jumped into the enclosure and tried to hug it.

They may be cute, but they ain't cuddly.
Posted by Albatross at 5:37 PM No comments:

What's odd about a panda getting pregnant? Nothing, really. It's apparently not a commonplace thing in captivity, but it's not really strange that a panda female gets impregnated.

The strange part is that the creature warrants a "24-hour birth watch".

SAN DIEGO - A giant panda at the San Diego Zoo is pregnant again and expecting her fourth cub sometime in August.

Then why the need to watch her 24 hours a day?
Posted by Albatross at 6:24 PM No comments:

Most stunning headline of the day

"Why people have sex: It feels good"

And in other news, people generally avoid sharp, pointy things.
Posted by Albatross at 5:04 PM No comments: