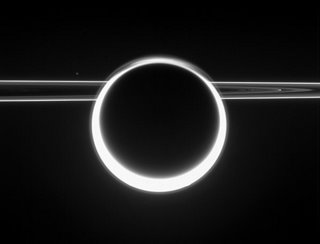 This incredible picture was taken by the Cassini spacecraft, currently exploring Saturn and its environs. The hazy ring of light is a planet-wide (moon-wide?) sunset seen through Titan's thick atmosphere. Find out more here. [Courtesy NASA/JPL-Caltech]
Posted by Albatross at 8:36 PM No comments: 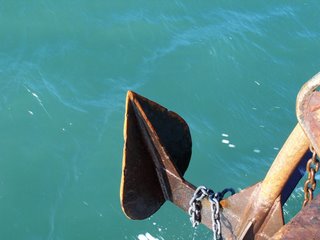 Nothing but an anchor over the sea.
Posted by Albatross at 8:22 PM No comments:

You're in Iraq, and suddenly you are set upon by wild dogs. What do you do? Put the baby down so you can run faster.

From the site of the Multi-National Force in Iraq:

The mother of the child told Iraqi Police she left the child in her daughter's care. The daughter was carrying the baby on the road near the LSA when she was chased by wild dogs and left the baby so she could run faster, according to reports given to Capt. Lance Awbrey, commander, Battery B, 3rd Battalion, 29th Field Artillery.

Good thing there were American soldiers nearby.

Staff Sgt. Donald White, patrol leader 4th Infantry Division, Task Force Band of Brothers, and his team came across a box on the side of the road while on patrol.

Initially, he thought it was an improvised explosive device until he heard crying coming from the box. ...

The skin was literally hanging off the child and we could see it was massively dehydrated and malnourished. Sullivan told me we needed to get the child to a hospital right away and we jumped into the trucks and drove to the hospital as fast as we could, Smith said. ...

By the time the patrol made its way to the Balad Air Base hospital the staff was already waiting for them when the vehicles pulled up. The Air Force medical staff treated the child by putting a feeding tube into him to replenish lost fluids. After a while the baby regained its strength and was in stable enough condition to be released. A civilian liaison with the Iraqi hospital in Balad was called and the child was released to hospital care.

Those guys don't get paid enough.
Posted by Albatross at 9:39 PM No comments: 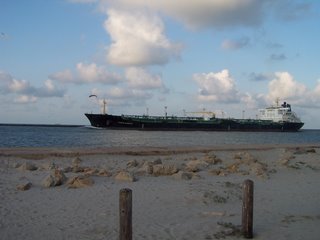 Just a picture of a big ship making its way through the channel.
Posted by Albatross at 8:34 PM No comments:

The Chinese are trying to help pandas reproduce by setting aside more land area as reserves for them.

The 300 pandas of a rare subspecies who call northwest China's central Shaanxi province home will soon be protected by five new reserves in the fog-shrouded Qinling mountains, the China Daily said. ...

The reserves would cover about 80 percent of the pandas' habitat once they are expanded from 181,100 to 500,000 hectares, the paper said.

This is undoubtedly a triumph for all the panda lovers, but I can't see how changing the designation of land that the creatures already use will help them breed more.
Posted by Albatross at 7:15 AM No comments:

The Advanced Camera for Surveys, a third-generation instrument installed by a space shuttle crew in 2002, went off line Monday, and engineers are still trying to figure out what happened and how to repair it.

"It's still off line today," Max Mutchler, an instruments specialist at the Space Telescope Science Institute in Baltimore, said Saturday.

I hope they can get it fixed. The images taken by Hubble have been breathtaking and sublime. It is sad to think there might be no more, but we can be thankful for what we have.
Posted by Albatross at 9:59 PM No comments:

Good news for all those who love the cute dead-enders called pandas. There's more out there than we thought.

SHANGHAI, China - Scientists using DNA samples have doubled their estimates of the wild panda population in a nature sanctuary in China, a finding they say bodes well for the survival of the endangered species.

The researchers believe between 66 and 72 pandas are living in the Wanglang Nature Reserve — more than twice the previous estimate of 32, said Wei Fumin, a zoologist at the Chinese Academy of Sciences.

How do they know this? They took genetic profiles of poop. And it had to be fresh.

[Study author Michael] Bruford said the field work, carried out by graduate student Zhan Xiangjiang, was arduous, not only due to the mountainous terrain but also because of the need to obtain fresh samples for DNA analysis.

"Once panda feces change from green to brown, we know we've had it," he said.

What a job.
Posted by Albatross at 6:07 PM No comments:

Interesting discussion at The Volokh Consipiracy about whether saying something is "X times lower" than something else makes any sense at all. The only definitive conclusion I can draw from the comments is that it's probably best to just skip the phrase. For example, Hedberg says:

As the first comment demonstrates, these usages (x times larger, x times lower) can be confusing. For ten times larger, multiply by 11; for ten times lower, divide by which: ten or eleven? Although I'm neither a genius nor an expert on English usage, I do have an advanced engineering degree and some facility and familiarity with both math and English. Despite that, I find the usage "X times lower" to be confusing; I'm never quite sure what is intended. If what is meant is "one tenth as much," I ask myself, when I encounter it, why did not the writer write that?

If what you have written causes this much confusion (128 comments to discuss the matter at the time of this writing!), then dump the phrase. Find another way to say it. This bugbear just isn't worth the hassle.
Posted by Albatross at 8:14 PM No comments: 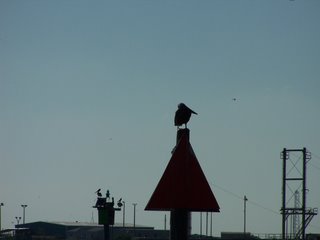 Nothing but a shot of a few pelicans on a warm afternoon.
Posted by Albatross at 5:51 PM No comments: 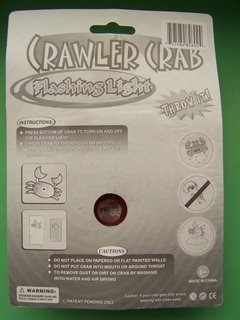 WARNING:
CHOKING HAZARD-Small ball. Not for children under 6 year.

Caution: If your crab gets dirty simply washing with clean water.
Posted by Albatross at 11:23 AM No comments:

Everybody in the pool!

MOSCOW (AFP) - Russia plans to send up a space exploration capsule to analyse the surface of Mars and collect test samples from one of the red planet's moons in 2009, Russia's space agency has said.

Let's all work together to get humanity to Mars. Soon. Even if it means working with Russia.

And, how can you not like a spacecraft called "Phobos-Grunt"?
Posted by Albatross at 5:11 PM No comments:

Been out for awhile, but now I'm back. New posts soon.
Posted by Albatross at 1:58 PM No comments:

Don't raise the ire of the people at the Language Log, especially Geoffrey K. Pullum.

The bottom line here is that people who are clueless about English grammar shouldn't be trying to humiliate others over grammar for political advantage. Those who feel grammar correction is something they want to discuss in the media should do just a little bit of work to prepare themselves for their calling. Not knowing a preterite from a participle or a clause from a phrase is like not knowing how to add small integers.

That's why I try to keep my criticisms to the obvious. If I'm unsure about why a piece of writing looks wrong, I usually keep my mouth shut to avoid putting a Reebok in it. And I almost never ridicule typos. They're pretty easy to identify, and I know they stem from a slip of the finger, not from a lack of learning. Though sometimes they are pretty funny.
Posted by Albatross at 9:03 PM No comments:

"There are other social forces affecting languages that make them far more informal than it used to," she says, citing the decline in formal tone and grammatical discipline set in motion in public education during the feel-good, express-yourself-as-you-will, don't-be-hampered-by-the-Man-with-the-red-pen hippie era.

"The Internet reinforces that," Baron says.

This is a good piece from Jen Gerson of the Toronto Star on the changing nature of the English language. I know that all languages evolve, but I lament any decline in punctuation in English. The properly placed mark can make all the difference in meaning, and I’m for more punctuation if it clarifies the message. Heck, I even prefer to use the optional comma before “and” in a series.

But, there is still hope for the language.

But Baron says that the day of abbreviating phrases and encrypting communication is ending.

She has found that while coded language is common among young teenagers, once a given person becomes more confident with typing and computers, the abbreviations and corruptions are abandoned.

The reason is simple: It often takes more time and effort to decode abbreviations than it does to spell out phrases in full.

I’ve often thought the same. What’s the point of “ROTFLMAO”? I can type the entire phrase as quick as it takes me to hold down the shift key with one hand and peck out the letters with the other. And how much does it actually add to “LOL”? Not much, I think.

I think Baron’s right. As people mature, they tend to put aside childish ways of thinking, acting, and—thankfully—writing, and they spell out words and use punctuation more. That’s good for our beautifully complex language.
Posted by Albatross at 4:33 PM No comments:

In the New York Times today (as on the Web site), there was some coverage of young golfer Michelle Wie. Though there is a slide show here that features several good photographs of Ms. Wie, the following is the one they chose to run in the hardcopy version. 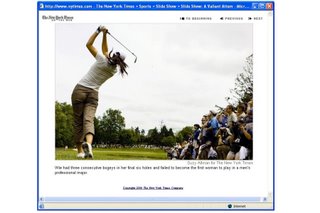 Is the Gray Lady going tabloid?
Posted by Albatross at 5:25 PM No comments: 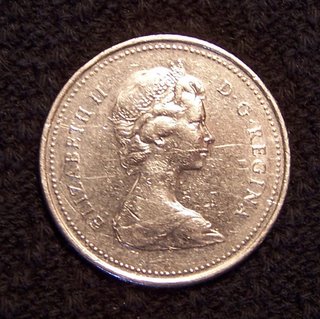 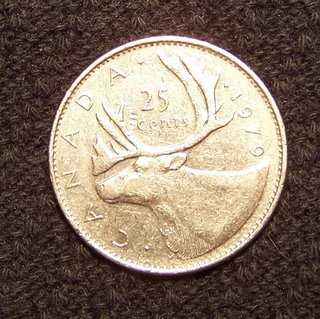 Nothing but a coin from the Great White North.
Posted by Albatross at 4:53 PM No comments: 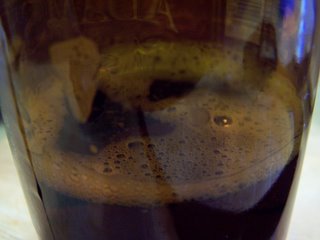 Nothing but a picture of a cool beer on a nice evening.
Posted by Albatross at 5:57 PM No comments:

Dean Bertram has a piece in The Australian about Hollywood's treatment of conspiracy theories and the silliness that ensues when new movies come out. I tend to agree with his arguments ("Hollywood has sanitised an assortment of weird beliefs and helped create what American political scientist Michael Barkun identifies as "a culture of conspiracy"."), but I enjoy his writing. He mixes magnificent words with common parlance in a way that is tight, expressive, and not overdone.

Intercutting the real with the staged and bombarding the audience with emotive footage and questionable data, these dubious productions served up an easily digestible but nonetheless half-baked reality, a type of dissent for dummies.

Nicely done. A little song in prose, as far as I am concerned.
Posted by Albatross at 4:54 PM No comments: