.
XKCD has a wonderful graphic to illustrate how the gravity wells of different bodies in our solar system compare to each other.

Truly a work of art and science.
.
Posted by Albatross at 6:05 PM No comments:

To me, historic refers to an event or location or other item that has made a name for itself in history while historical is a term that refers to a general quality that recalls an earlier era. The battle of the Alamo was historic, but the re-enactments of said battle are historical. Likewise, the Alamo chapel is a historic structure, but tourists come to San Antonio in part to enjoy the city's historical heritage.

I bring this up because this morning a Today show anchor referred to the blizzard that's been sweeping across the northern United States as a "historical Christmas storm". That usage mildly bothered me. If the storm goes down in the record books as particularly severe or long-lived, then it seems to me that that the storm is historic. You might refer to "historical" Christmas weather, but particular storms are "historic".

But perhaps I'm making too much of it. In fact, in my job, we sometimes have to deal with old structures or locations, and in my company's own paperwork I have noticed that "historic" and "historical" are used interchangeably. I seem to be the only one that even notices there are problems with the usage sometimes, so maybe I'm also the only one with this little linguistic hang-up.

What about you? Have you ever considered the differences between "historic" and "historical"?
.
Posted by Albatross at 7:19 AM No comments:

Have a merry one 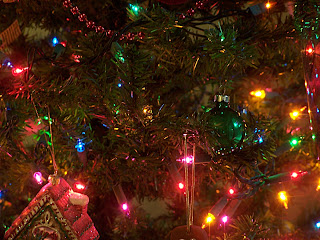 Posted by Albatross at 10:54 AM No comments:

"The Physics of Space Battles"

.
If you like science fiction -- especially the kind that involves space battles -- then you will most likely enjoy this Gizmodo article by Joseph Shoer.

So, I think the small fighter craft would be nearly spherical, with a single main engine and a few guns or missiles facing generally forward. They would have gyroscopes and fuel tanks in their shielded centers. It would make sense to build their outer hulls in a faceted manner, to reduce their radar cross-section. Basically, picture a bigger, armored version of the lunar module. The larger warships would also probably be nearly spherical, with a small cluster of main engines facing generally backward and a few smaller engines facing forward or sideways for maneuvering. Cannons, lasers, and missile ports would face outward in many directions. On a large enough space cruiser, it would even be a good idea to put docking ports for the small fighters, so that the fighters don't have to carry as many consumables on board.

I think it's time to sketch some pictures and write some stories!

(Hat tip: The Volokh Conspiracy)
Posted by Albatross at 5:41 PM No comments: 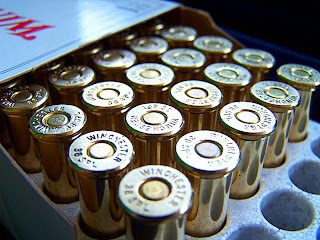 Nothing but a bunch of .38 Special ammunition cartridges.
.
Posted by Albatross at 5:21 PM No comments:

.
The Cassini spacecraft catches the glint of morning light off a liquid lake on Titan, Saturn's smoggy moon. 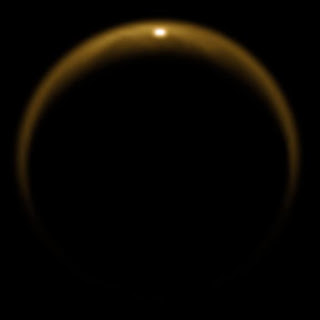 Image courtesy NASA/JPL/University of Arizona/DLR. Read more about the image here.
.
Posted by Albatross at 4:41 PM No comments:

Schooling from the Punisher: how to say 2010 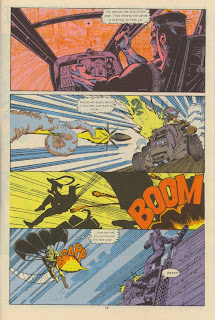 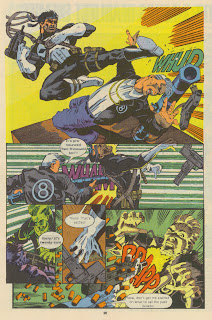 My wife reminded me that we are only 13 days away from Christmas. How does this sort of thing catch up on me? I mean, it seems like only a few weeks ago that we were celebrating Thanksgiving. Time flies. Next thing you know, it will be 2010. Then, we can join everybody in pronouncing the year, “Twenty-Ten” instead of “Two-thousand and nine”. I know this is not something worth arguing, but I think the only person I hear saying “Twenty-oh-nine” is the bow-tied Charles Osgood on CBS Sunday Morning. And he is correct, by the way. Everyone else I know says “Two-thousand and nine.” All I know is, this year; I am going to party like it is “One Thousand, nine-hundred, and ninety-nine.”

.
"Whatta ya say we make apple juice and fax it to each other?"

.
Who wouldn't want this to be true?

HEIDELBERG, Germany -- It is a story guys everywhere have been waiting to hear. Beer may actually help prevent prostate cancer.

Preliminary evidence shows an ingredient in beer that's derived from hops is able to block the effect of testosterone on the prostate.

However, one doctor told USA Today that if beer could prevent prostate cancer, we would already see lower rates of it.

Well, maybe the current rates are the lower rates. Perhaps, if everyone stopped drinking beer, prostate cancer rates would skyrocket.

Did ya ever think of that?
.
Posted by Albatross at 4:31 PM No comments:

.
And the event produces a very strange -- and somehow quite cool -- confluence of people, terms, and ideas.

SpaceShipTwo made its debut here today – a super-slick looking rocket plane showcased as the world's first passenger-carrying commercial spacecraft. The enterprise is under the financial wing of well-heeled U.K. billionaire and adventurer Sir Richard Branson and his space tourism firm Virgin Galactic.

Some 800 onlookers were treated to the rollout ceremonies – an event that took place in a very cold, windy, and near-snow desert environment here at the Mojave Air and Space Port. Still, attendees were treated to a glittery and spectacular site – the public unveiling of SpaceShipTwo, slung underneath its carrier aircraft.

"I have to tell you that there's a lot of cool things you get to do when you're Governor, said Schwarzenegger. "But today is one of the coolest things that I've ever done."

Amorphis is a Finnish metal band that I've listened to off and on over a few years, but this is the first full album of theirs that I have bought.

In two words: good stuff. I like the vocals and the harmonies, and some of their offerings on their other albums depart from traditional metal in a way that really slaps my ears in a good way. Skyforger is a solid addition to Amorphis's discography, and my only complaint is that which I've had all along with the band: their penchant for punctuating their music with death vocals. I know Amorphis started out as a death metal band, but their talent for harmonies and clean vocals is clear, and I think they can eventually let go of the growl without losing any power.

That having been said, the death vocals really don't detract from the beauty of this album. If you only want to download a few songs from Skyforger to see if you really like the stuff, I recommend "Sampo," "Sky is Mine," "Highest Star," and "Course of Fate."
.
Posted by Albatross at 9:02 PM No comments:

How exackly will it be enforced?