Arnold Zwicky at the Language Log posts on the odd logic Apple uses to insert asterisks in words on iTunes in order to not offend ("Automatic Asterisking").

No software can censor with as much refinement as the human mind precisely because the English language is alive, varied, and richly complex. It takes a living mind to truly grasp the language, and, until computers actually think as we do, we will continue to get risible results from such efforts as that employed on iTunes.

But that's OK. We all need a good chuckle from time to time.
Posted by Albatross at 8:40 PM No comments:

The Brits are cracking down on violent animal rights folks, and I say good for them.

"Hundreds of millions of people in the UK and around the world today are alive and healthy because of the pioneering work of our scientists and researchers," [British Prime Minister Tony] Blair said in the three-page document.

"Many millions more will be spared an early death or a life of pain because of the research now under way. They deserve our support. And they should get it."

Amen. Because of this:

The British government tightened up legislation in response to a number of high-profile animal rights campaigns.

Companies and individuals associated with the facility, including shareholders of British pharmaceutical giant GlaxoSmithKline, have also been targeted.

Contractors at a new biomedical research centre in Oxford, southern England, have also faced threats, forcing work to stop, while the owners of a farm that bred guinea pigs for medical testing suffered a six-year terror campaign. [emphases added]

It's sad when people put animals above people. I don't think you should be cruel to animals for cruelty's sake, but, then again, how much of an argument can animal rights activists have when they also think dead fish should be treated with respect?

If you run across people who threaten you for being disresepctful to sushi, keep your kids away from them.
Posted by Albatross at 5:54 PM No comments:

In other news, Southerners pound mint juleps on nary a dare

"Yankees down Devil Rays on 2 Damon Homers"
Posted by Albatross at 1:30 PM No comments:

"Evidence of Hydrocarbon Lakes on Titan"

It's looking like Cassini has found evidence of great big lakes. But don't expect to ski on them.

The cluster of lakes was spotted near Titan's frigid north pole during a weekend flyby by the international Cassini spacecraft, which flew within 590 miles of the moon.

Researchers counted about a dozen lakes six to 62 miles wide. Some, which appeared as dark patches in radar images, were connected by channels, while others had tributaries flowing into them. Several were dried up, but the ones that contained liquid were most likely a mix of methane and ethane.

Posted by Albatross at 6:05 PM No comments:

Nice adventure. If you've got the dough.

A private Virginia firm that already has sent three super-rich men to the international space station for $20 million each announced Friday it would offer an even rarer adventure: A stroll outside the space station for an extra $15 million.

If I had the money, I would consider it, though I would probably be frightened and exhilarated at the same time.

Posted by Albatross at 8:57 PM No comments:

Uh, why is this a story? Anyone who has grown up anywhere near a farm or ranch knows that people have been using artificial insemination on domesticated animals for a long time. How long? The article even tells us:

Matt Schultz, a herdsman at B & B, said the farm has used artificial insemination since 1987. ...

Evidence shows one of the first uses of artificial insemination dates back to the Arabs in the 14th century .... The first official use was in Italian dogs in 1780.

Rutgers University in New Jersey formed the first commercial artificial insemination organization in the U.S. around 1938.

That's a long time to get around to writing a news story about it. Poor Carrie Antlfinger, Associated Press Writer. She must have really pissed someone off to get assigned this yawner. But, she did manage to work in a gem of a quote:

Back at B & B Dairy, Schultz said the cows seem to know Ken Montsma, the artificial insemination technician for Accelerated Genetics, one of the insemination companies.

"Kenny comes in and it's like they come and find him," Schultz said.

Heh. Maybe they find him first.
Posted by Albatross at 5:47 PM No comments:

How did they resist adding three or four exclamation points after this hyperventilative headline?

Waiting for the end of the sentence

Rescue our children's what? 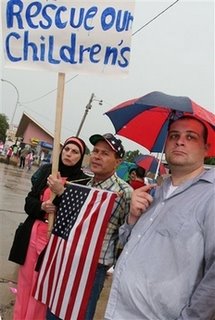 Original AP photo appeared in this slideshow with this caption: "Mahmoud Hakim, center, and family whose daughter lives in Nabatieh, Lebanon, demonstrate against Israeli bombardment of their native country on Friday, July 14, 2006, of Dearborn Heights, Mich. (AP Photo/Jeff El-Sayed)"
Posted by Albatross at 6:26 PM No comments:

One with plenty, one with none 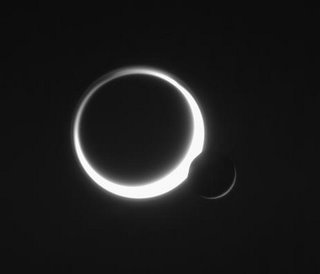 This is an incredible image of two of Saturn's moons, Titan and Rhea. Titan is the larger of the two, and it has a thick atmosphere of primarily nitrogen. The smaller moon, Rhea, has no air.

This image demonstrates the extent that light can be affected by an atmosphere. Titan's thick smog allows sunlight to encircle the moon in a dramatic all-over sunset (or sunrise, I suppose), while the light barely peeks over the edge of airless Rhea, producing an equally dramatic crescent.

More about this image and how it was produced can be found here.
Posted by Albatross at 5:05 PM No comments:

The interesting becomes plausible, and then is cool.

LOS ANGELES - An experimental spacecraft bankrolled by real estate magnate Robert Bigelow successfully inflated in orbit Wednesday, testing a technology that could be used to fulfill his dream of building a commercial space station.

In a brief statement posted on his Web site, Bigelow said the Genesis I satellite "successfully expanded" several hours after liftoff. No other details were provided.

Posted by Albatross at 9:13 PM No comments:

LOS ANGELES - A hotel tycoon's dream of building an inflatable commercial space station is taking a step toward reality — or a reality check — with the launch of a satellite that will test the technology behind the orbital outpost.

The fact-finding mission scheduled for this week will explore the feasibility of Robert Bigelow's planned commercial space complex. When finished by 2015, he said, it will consist of balloon-like modules strung together like sausage links and serve as a hotel, laboratory, college or entertainment venue. ...

The company plans to boost several prototypes into orbit this decade to increase the chances of success. Subsequent launches will test docking among spacecraft. But the maiden Genesis flight will primarily test the inflation process.

The concept of balloon modules for space vessels is something NASA apparently considered in the past but rejected as being too costly. I wish Bigelow well and hope he gets a good return on his investment, but he had better find some good success with this technology. Though the structures are supposedly "pop-proof", I don't see people paying money to crawl inside a big balloon in space unless it has a good performance record.
Posted by Albatross at 8:20 PM No comments: 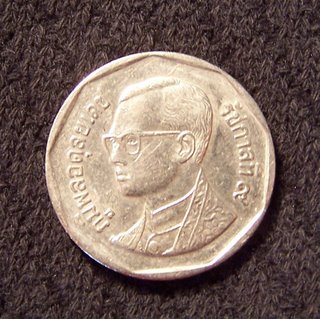 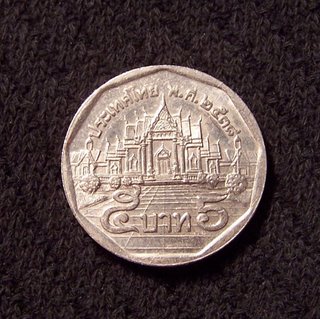 Nothing but a coin from Thailand.
Posted by Albatross at 6:09 PM No comments:

OSLO, Norway - Hunters shocked a boatload of tourists on a whale watch off Norway's Arctic during the weekend, harpooning a whale in front of them.

Posted by Albatross at 10:38 AM No comments:

Every once in a while, this bubbles to the surface of the news cycle: an idiotic idea to rework the entire English language to make spelling easier.

It's been 100 years since Andrew Carnegie helped create the Simplified Spelling Board to promote a retooling of written English and President Theodore Roosevelt tried to force the government to use simplified spelling in its publications. But advocates aren't giving up. ...

"It's a very difficult thing to get something accepted like this," says Alan Mole, president of the American Literacy Council, which favors an end to "illogical spelling." The group says English has 42 sounds spelled in a bewildering 400 ways.

I prefer to see as a wonderfully rich 400 ways.

English's uniqueness comes from its dual nature. It is, at its core, a Germanic language fused with a Romance language, and every subtle, daring, inspiring, breathtaking way that our words can be combined to convey meaning make me love the language even more. The odd spellings that survive to this day reflect some of the adventurous paths that our words have taken, and to strip the words of their etymological pasts will erase those paths for future generations.

I don't like the idea of simplifying our spelling, and I hope it is forever a novel concept that cannot find purchase.

Posted by Albatross at 5:05 PM No comments:

This story by Sonia Moghe at the AP claims that some students in Dallas have made a microscopic U.S. flag using an ion beam and a nano manipulator. Though the story is all over the place, I have yet to see an image of the flag, which leads me to believe the students may be a bit full of it. It's easy to make claims if you don't have to show proof to back it up.
Posted by Albatross at 5:17 PM No comments:

... by holding a birthday party for one of the evolutionary dead-enders.

Tai Shan, the National Zoo's rare and popular giant panda cub, turns a year old Sunday, and the scientists, keepers and volunteers who helped bring him into the world are holding a big public birthday party.

The celebration, from 10 a.m. to 2 p.m. Sunday at the animal park, will feature entertainment, children's activities and the opportunity to talk with the zoo's panda staff, scientists and veterinarians.

Gotta promote them pandas. Especially after all the trouble us humans have gone to to get them to breed. Whether they like it or not.

The cub, in particular, has become a high-profile ambassador -- used to promote efforts to save giant pandas in the wild, where 1,600 live in the rugged mountains of south-central China, and to increase the captive population of fewer than 200 worldwide, including 11 in U.S. zoos. His birth last summer using cutting-edge artificial insemination techniques also has put the National Zoo front and center among those working to breed and protect this endangered species. [emphasis added]

No matter what, the panda will survive. Because they are so cute.
Posted by Albatross at 8:40 PM No comments: 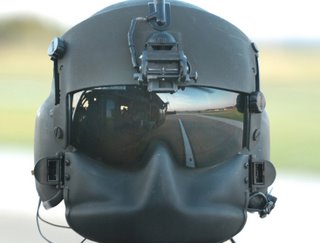