While reacquainting myself with the classic At Folsom Prison album by Johnny Cash, something grabbed my interest. I doubt that I noticed this particularly interesting item way back when I was a kid listening to my father's copy of this album, but, if I did, I probably didn't think about it too much.

What I find interesting is in the bit just after the song "The Long Black Veil". If you are not familiar with At Folsom Prison, it was recorded live during a concert in a prison, the actual Folsom State Prison in California. And Folsom did not shut down for Johnny Cash's concert. It kept on operating. In the background during some of the songs you can hear bells ringing (as secure doors are opened, I presume), and in between songs prison officials make any necessary announcements for the prisoners. In the recording I have isolated below, one official calls for a prisoner to go to another section.


He says the name twice, pronouncing it with a Spanish emphasis and an English "a". Then he spells out the name. And then he pronounces it once again, this time with an Anglicized emphasis.

That's curious. Why did he feel the need to call out the name with two different pronunciations and emphasis? It's obvious that the announcement was intended for the ears of the prisoner named Sandoval, but was it a widespread practice in California back in the 1960s (when the album was recorded) to pronounce Spanish names with an English phonology, as the prison official did the last time? Would a Hispanic person back then expect to hear san-DO-vul rather than SAN-do-val, and the official was just making sure the announcement wasn't missed? Or was the official simply unsure if he was pronouncing it correctly in the first place, so he covered his bases?

In places that are heavily Hispanic, like San Antonio, Spanish surnames are all over the place, and even white guys like me know how to pronounce them. Some people have problems with ényes and double-r trills (one girl I knew pronounced her name "Aguirre" as uh-Gary because she couldn't trill for the life of her), but the generally accepted practice is to use Spanish phonology with Spanish names, even if you are speaking English. Is it different in California, or was it merely different back then and that's not the case today? I don't know, because I'm not from California, and I haven't been in prison. But I am genuinely curious.
Posted by Albatross at 8:15 PM 1 comment: 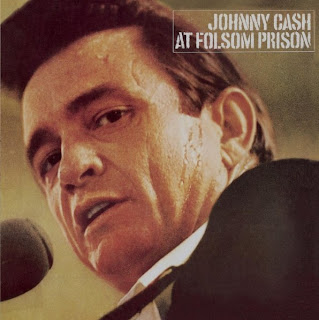 That's Johnny Cash's At Folsom Prison, one of the most influential albums of my young, tender formative years. It was one of my father's albums, and it was also one of the albums my mother hated for us boys to listen to. So, of course we listened to it on the sly whenever we could.

And, believe it or not, I never had this complete album in my collection. Until today, when Amazon chose to run it as a special -- just five dollars. For the whole album.

Childhood memories relived are worth a few bucks, dontcha think?

Now, excuse me while I go listen to it again. On the sly, for old time's sake.
Posted by Albatross at 8:48 PM 3 comments:

On my way back

I've been gone too long, and I think I'm on my way back. Hope to see you soon, in the next few days or so.
Posted by Albatross at 8:18 PM No comments: