Posted by Albatross at 5:15 PM No comments:

A volcano can be interesting, even if you don't know what is going on.

BELLINGHAM, Wash. - More than three decades after steam bursts from Mount Baker resulted in a temporary evacuation of the Baker Lake area, geologists are trying to determine what is happening beneath the volcano.

The research by scientists from Western Washington University is at the center of a Geological Society of America meeting next month in Bellingham. Initial findings indicate the volcano will remain quiet for awhile but not forever, said Juliet G. Crider, an associate professor of geology who led a recent study into the steam and ash spurts[.]

"People are beginning to recognize there's a lack of understanding of Baker," Crider said.

"Among the Cascade volcanoes, I would say it's one of the more active," she said. 'That doesn't mean an eruption is imminent, but it means it's interesting. Something is happening there."

I'm taking a guess, but I think it would be safe to go on the assumption that an eruption just might be imminent.
Posted by Albatross at 5:09 PM No comments:

This sounds promising, a planet that might actually be habitable.

The planet is just the right size, might have water in liquid form, and in galactic terms is relatively nearby at 120 trillion miles away. But the star it closely orbits, known as a "red dwarf," is much smaller, dimmer and cooler than our sun.

There's still a lot that is unknown about the new planet, which could be deemed inhospitable to life once more is known about it. And it's worth noting that scientists' requirements for habitability count Mars in that category: a size relatively similar to Earth's with temperatures that would permit liquid water. However, this is the first outside our solar system that meets those standards.

Until now, all 220 planets astronomers have found outside our solar system have had the "Goldilocks problem." They've been too hot, too cold or just plain too big and gaseous, like uninhabitable Jupiter.

The new planet seems just right — or at least that's what scientists think.

I hope more planets like this are found. Though it will take a lot of work and determination for humans to adapt to life on a new planet, I have no doubt such an adventure will eventually be borne out in humanity's future. After all, we are so adaptable, aren't we?
Posted by Albatross at 8:33 PM No comments: 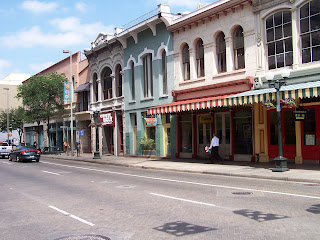 Nothing but a picture of downtown San Antonio on a sunny afternoon.
Posted by Albatross at 8:18 PM No comments:

Nah, not really. But you might want to believe so if you are an animal rights activist. Geoffrey Pullum at Language Log talks about it here, and he aptly concludes:

Of course birds communicate fear, solidarity, warning, lust, etc. What I'm trying (utterly in vain) to draw people's attention to is the fact that there is a common misconception that this means they have language in the sense that humans have it — i.e., that humans are not much more than chickens with ballpoint pens. The really deep offense here is not so much the pathetic gullibility of the sentimentalists who anthropomorphize the animals they love, and over-attribute intelligence and verbality to them, but rather the insult to humans.

Amen to that, Mr. Pullum. Your words are not in vain here.
Posted by Albatross at 6:06 PM No comments:

Sounds pretty cool to me.

The portable robot, which can be controlled over the Internet by a human surgeon many miles away, is being developed with money from the U.S. Defense Department to be used to treat wounded soldiers on a battlefield, to perform complicated surgery on patients in remote areas of the developing world and to help sick astronauts in space.

Posted by Albatross at 8:14 PM No comments:

Should we have more of them bothering our leaders?

There's a new Doritos flavor in town: Wild White Nacho. This and another flavor (I think it's some kind of barbeque) are being test-marketed, and Doritos wants the public to pick which one of these flavors is kept on as a permanent option for consumers.


I don't know what the other flavor tastes like, but the Wild White Nacho is not that impressive. But, when looking at the distinctive packaging, I noticed something a bit odd. It seems that this new nacho flavor somehow warrants Spanish puncuation for English words. 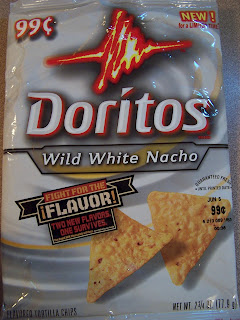 FIGHT FOR THE
¡FLAVOR!
TWO NEW FLAVORS.
ONE SURVIVES.

NEW!
for a LIMITED TIME ?


Having grown up in South Texas, I have heard a lot of Tex-Mex spoken. That's a local dialect that is a blend of English and Spanish. But, this is the first time I can remember seeing Spanish punctuation used this way.
Posted by Albatross at 5:14 PM No comments:

One of these things is not like the others

Here is a screen capture from the Space and Astronomy section of Yahoo News on April 15, 2007. Can you tell which item does not belong? 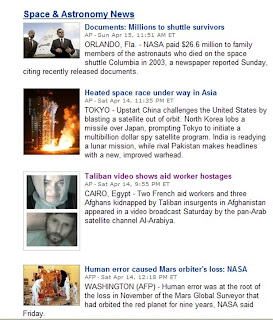 Yahoo really needs to work on their sorting logic. Apparently, the mere mention of the word "satellite" (as in "pan-Arab satellite channel Al-Arabiya") is enough to categorize a story about Taliban kidnappers as a space story.

Posted by Albatross at 6:12 PM No comments:

COLORADO SPRINGS, Colorado - Japan is building upon its past successes in space to forge a range of initiatives, from disaster warning systems, probes to Mercury, Venus and Jupiter, as well as conduct an aggressive lunar exploration campaign.

"Space is a common frontier for humanity," [Vice President of Japan Aerospace Exploration Agency (JAXA) Kaoru] Mamiya explained, and "international cooperation is essential." In this regard, JAXA is prepared to be a major player in the replanting of human footprints on the Moon.

When it comes to space exploration, I say, the more the merrier. We need more nations, more private companies, and more investments dedicated to exploring our solar system and the stars beyond. And I think our ultimate goal should be colonization. Or else, what's a heaven for?
Posted by Albatross at 7:19 PM No comments:

Even when I was a kid in the 1970s, I didn't put much credence in the claim that you could own wonderful families of pets that would do your bidding for just the low price of $1.25 (plus postage). It certainly seemed outlandish. Still, when I ran across this old advertisement for Sea-Monkeys, I couldn't help but wax a little nostalgic. 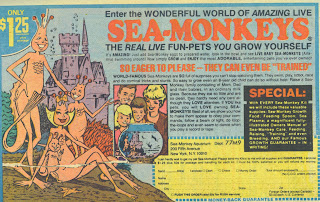 I knew better at the time; I knew that the Sea-Monkeys would not appear in any tank as a happy, smiling family. But, I remember still feeling a faint sense of disappointment when I found out that they were nothing but brine shrimp.
Posted by Albatross at 8:03 PM No comments:

Despite a rocky start, two unmanned spacecraft have succeeded in their first autonomous satellite refueling demonstration while orbiting high above Earth.

"The first Orbital Express demonstration, Scenario 0-1, was very successful," a spokesperson Jan Walker for the U.S. Defense Advanced Research Projects Agency (DARPA), which is overseeing the mission, said in a written update Wednesday. "ASTRO transferred just under 32 pounds (14 kilograms) of hydrazine to the NextSat client, meeting the scenario objective."

Walker said the robotic arm-equipped ASTRO, short for Autonomous Space Transport Robotic Operations, first delivered the hydrazine during the early hours of April 1 via a fluid hookup, and then followed up by transferring an additional 19 pounds (8.6 kilograms) of propellant to NextSat a day later. NextSat was due to return propellant to ASTRO sometime today, she added.

In addition to refueling demonstrations, ASTRO is also designed to perform tasks such as autonomous undocking, proximity operations and re-docking, as well as use its robotic arm to install a battery on NextSat.

Robots in space. Satellites repairing and refueling each other. It don't get much cooler than that.
Posted by Albatross at 8:39 PM No comments:

I've been posting some wonderful pictures of Saturn and its satellites taken by the Cassini spacecraft, but I don't want to forget about Jupiter. And I don't have to now that the New Horizons probe is on its way to Pluto and taking some pictures of the Jovian system as it passes. There are some good ones, like this photograph of the moon Io, bedecked with a volcanic plume. 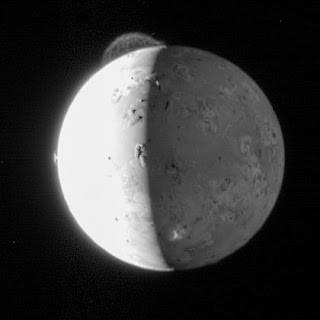 Incredible. Read more about this picture here.
Posted by Albatross at 8:55 PM No comments:

... whether the little evolutionary dead-enders like it or not.

Authorities at the Chiang Mai Zoo in northern Thailand inseminated Lin Hui with semen from her cage-mate, Chuang Chuang, on Monday morning and will repeat the procedure on Tuesday. The artificial insemination is a last ditch effort to get Lin Hui pregnant, after videos of pandas having sex failed to entice Chuang Chuang into mating with his partner.

"He just didn't want to mate. He was looking at her as a friend," said Sophon Dummui, director general of Thai Zoo Organization of Thailand which oversees the Chiang Mai Zoo. [emphasis added]

Platonic relationships are not for pandas! And we humans will make sure of that!
Posted by Albatross at 7:03 PM No comments: