Titus died at the age of forty-one, in the same country house where Vespasian had also died. It was 1 September, A.D. 81, and he had reigned two years, two months, and twenty days. When the news spread, the entire population went into mourning as though they had suffered a personal loss. Senators hurried to the House without waiting for an official summons, and before the doors had been opened, and then when they were open, began speaking of him, now that he was dead, with greater thankfulness and praise than they had ever used while he was alive and among them.


Titus, no doubt, was a great emperor as far as the ancient Romans were concerned. But they could have at least let him know that while he was still alive. 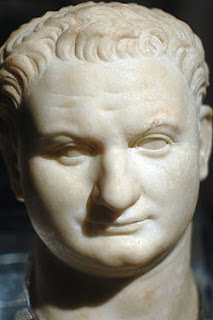 Perhaps his soulless glare intimidated them.
Posted by Albatross at 8:35 PM No comments:

He died 45 years ago today.

Who was he? He was this guy. 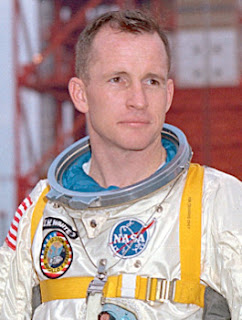 He was an astronaut. He was the first American to ever walk in space. He was from San Antonio. And he died on this day in 1967.

In the Apollo 1 capsule.

His death -- along with those of fellow astronauts Virgil "Gus" Grissom and Roger Chaffee -- were very tragic, but their passing woke NASA up to some very important changes that needed to be made in order to make space travel much, much safer for everyone else who came after them.

Thank you, Col. White. Your sacrifice will not be forgotten. Your family can be very proud of you. San Antonio can be proud of you. And we are.

We are.
Posted by Albatross at 9:06 PM No comments:

[Julius] Caesar was the first Roman to build a military bridge across the Rhine and cause the Germans on the farther bank heavy losses. He also invaded Britain, a hitherto unknown country, and defeated the natives, from whom he exacted a large sum of money as well as hostages for future good behaviour.


I remember seeing a documentary piece on that bridge Julius built over the Rhine. At the time it was considered a technological wonder (and, for all I know, such a bridge today would still be a wonder) because it was built over the Rhine in order to accommodate the Roman army.

Not just a wagon or two, but an entire army of bad-ass Romans eager to kick some German butt.

Before this bridge was built the Germanic tribes remained largely unmolested by the Romans because of the natural defensive line the Rhine provided, giving them a sense of security on their side of the river. But Julius Caesar said, Screw that. If I'm going to show these Germans who's really the boss, I'm going to need to get serious and build me a REAL bridge, one that will leave them slack-jawed while I march into their county like I owned the place.

And then a couple of years later, he did it again. Just as a reminder.

His strategy largely paid off. It made the Germanic tribes rethink how they handled the Romans, perhaps convincing them that if Caesar was batty enough to build such infrastructure only to immediately tear it down (twice!) just to show that he could, then perhaps he was just batty enough to do anything he wanted to them.

And then, he conquered Britain. In a manner of speaking.

All I need is a bridge long enough. --Caesar
Posted by Albatross at 8:44 PM No comments:

Titus also assumed command of the Guards [before becoming emperor], a post which had always before been entrusted to a knight, and in which he behaved somewhat high-handedly and tyrannically. If anyone aroused his suspicion, Guard detachments would be sent into theatre or camp to demand the man's punishment as if by the agreement of everyone present; and he would then be executed without delay.


Just in case you thought the previous post about Titus portrayed him in too positive a light, here's one to bring his image back down to earth. Or at least back to where most emperors reside. 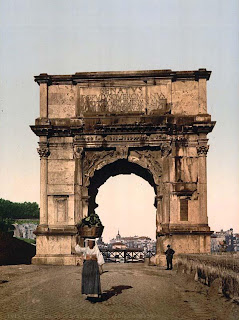 You know, in Rome. Where they build massive arches to honor them.
Posted by Albatross at 8:27 PM No comments:

Domitian was not merely cruel, but cunning and sudden into the bargain. He summoned a Palace steward to his bedroom, invited him to join him on his couch, and made him feel perfectly secure and happy, condescended to share a dinner with him -- yet had him crucified on the following day! ... And the abuse he iniflicted on his subjects' patience was all the more offensive because he prefaced all his most savage sentences with the same speech about mercy; indeed, this lenient preamble soon became a recognized sign that something dreadful was on the way.


Have you heard the old saying about not trusting Greeks, even when bearing gifts? I suppose the same could be said for the descendants of Troy, too. 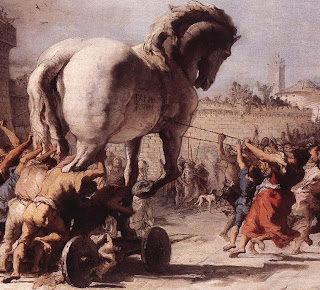 Crap. Who the hell can we re-gift this thing to?
Posted by Albatross at 7:52 PM No comments:

So, I hear Tony Iommi has cancer. Lymphoma.

That's bad. The few people I've known that have come down with lymphoma have died. I hope Iommi survives it, I really do. I would miss him.

The stage in my life where I spent much of my free time and my extra money going to as many concerts as I could -- from small rock clubs to large, pyrotechnic arena shows -- began and ended with Tony Iommi. From the first time I saw Black Sabbath in 1984 to the last time I saw that band in 1999, Iommi laid out the dark chords for me and made me love loud music. And Black Sabbath has been a part of my musical preferences ever since.

Black Sabbath is undoubtedly one of the most influential bands of all time, and Iommi has always been the heart of that ensemble, the only constant in a band that proved to be both innovative and dysfunctional at the very same time. I love his unique, heavy style, and I think all of metal owes him much gratitude.

I recognize that not every metalhead finds Iommi's guitar work easy to listen to. But without him and his crazy, left-handed, two-leathered-fingertipped way of playing there would be no black metal today. There would be no doom metal, no death metal. And, dare I say, no real heavy metal at all. Oh, there was hard rock back in the 1970s, sure, and without Black Sabbath and Tony Iommi that hard rock eventually would have developed and grown into something like heavy metal, but there is no way that metal would have been anything like what we have today. Not without Iommi. His dark chords and low tuning have burned a template into the realm of rock that headbangers still use to this day.

I hate to gush like a fanboy, but I really do think that much of Iommi. And I hope he has all the strength and support he needs to pull through this personal crisis. I certainly hope the best for him.

Posted by Albatross at 8:20 PM No comments:

What I was listening to today

I hadn't heard Johnny Cash's "Cocaine Blues" in a very long time. But, in the process of dragging out some Cash recordings to introduce the departed singer to my young son, I came across this song and several others of a rather rough nature.

And they took me back to a time when I was a young boy, a time when my brothers and I would wait until my mother was gone so we could sneak out my dad's Johnny Cash albums, hidden away in the dark recesses behind the speakers of the wooden console stereo entertainment center. And then we would listen to them on the sly. Because, you see, my mother did not like us young children to listen to Johnny Cash. Or Tex Ritter. They were very rough, and crude.

And I remembered all this, and I smiled. And then I told my son that the best way to listen to Johnny Cash is on the sly.
Posted by Albatross at 9:28 PM No comments:

Claudius had a certain majesty and dignity of presence, which showed to best advantage when he happened to be standing or seated -- and especially when he was in repose. This was because, though tall, well-built, with a handsome face, a fine head of white hair and a firm neck, he stumbled as he walked owing to the weakness of his knees; and because, both in his lighter moments and at serious business, he had several disagreeable traits. These included an uncontrolled laugh, a horrible habit, under the stress of anger, of slobbering at the mouth and running at the nose, a stammer, and a persistent tic of the head, which was apparent at all times but especially when he exerted himself to the slightest extent.


But besides all that, he was handsome. Really.
Posted by Albatross at 8:23 PM No comments: