One of the bravest men ever to walk this planet has died.


Neil Armstrong was a quiet self-described nerdy engineer who became a global hero when as a steely-nerved pilot he made "one giant leap for mankind" with a small step on to the moon. The modest man who had people on Earth entranced and awed from almost a quarter million miles away has died. He was 82.

Now, go take on the universe. 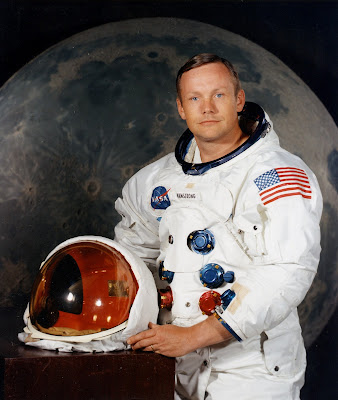 Posted by Albatross at 1:34 PM No comments:

Think you've got what it takes to be an artist? Perhaps you should practice your craft for a while, first.

At least before you start trying to restore old works of art. On your own.

The three photos above tell the tale. The image on the left is the original work, a century-old oil painting of Christ called "Ecce Homo (Behold the Man)" that was painted on a column inside a church near Zaragoza, Spain, by artist Elias Garcia Martinez.

Over the years, the work began to deteriorate, as shown in the second image. According to the Centre de Estudios Borjanos, the unnamed amateur artist (without permission from the church, needless to say) thought she could improve the work and set to work with paints and brushes. The third picture is the result.

The BBC reports that the woman realized her mistake and contacted Juan Maria Ojeda, a city council member in charge of cultural affairs for the area. "I think she had good intentions," Ojeda told the BBC.

(from Entertainment on Today)

Good intentions. Pavement. And all of that.

(Keep your paintbrushes at home.)
Posted by Albatross at 3:45 PM No comments:

If only Lucas could be this cool again.
Posted by Albatross at 7:52 AM No comments:

What I just finished reading

This is the second book in the Ringworld series, The Ringworld Engineers. Last month I re-read the original Ringworld after many years, and I did a post about it after reading it. In that post I noted that I liked the book more on the second reading because I already knew the complicated storyline and could focus more on enjoying the storytelling itself. And the same is true for The Ringworld Engineers: I enjoy it much more this time.

In this book, Louis Wu and Speaker-to-Animals (now named Chmeee) are kidnapped by the deposed leader of the Pierson's Puppeteers. This leader is known as The Hindmost, and he is determined to regain his title and position by recovering a fabulous machine from the Ringworld and bringing it back to his society. The Hindmost knows all about the adventures Louis and Chmeee had on the Ringworld because he is the mate to Nessus, the puppeteer who accompanied them on their previous journey. So he kidnaps Louis and Chmeee and forces them to go with him to the Ringworld and find his treasure.

They ultimately fail, but you can hardly blame them. For one, it seems that the incredible machine the Hindmost seeks is a fiction, after all. For two, the Ringworld itself is in danger of crashing into the sun. For three, they are trapped on the Ringworld.

Need I say that adventures ensue?

Some time back, while reading Asimov's Foundation again, I mentioned that I like to cast the characters in a work of fiction that I read. It gives me something to focus on as I read the dialogue and actions. While reading Ringworld I didn't worry too much about casting the characters because most of them were alien. The Puppeteer, the kzin, the various hominids on the Ringworld -- I didn't have too many human actors I could put in their roles. Even the character of Louis Wu is presented as incredibly old but not looking too old because of boosterspice, and though he is of Asian descent he is described as having lost any hint of Asian features due to many, many generations of interbreeding. So his appearance was difficult to visualize.

But for The Ringworld Engineers, I thought I would at least try. So, since Louis Wu is supposed to look youngish despite his 200-plus years, I decided to cast Grant Imahara in his role. I know Imahara is not really an actor, but it worked for me, and it livened up Louis's dialogue perfectly.

Chmeee is still a kzin, so I could imagine nothing more than a great big angry orange cat. And the Hindmost is a puppeteer. Good luck with visualizing that.

The other humanish characters I had a better time with. Since I had already used one person from MythBusters in my cast, I went ahead and cast Kari Byron as Valavirgillin. And then I went local and pictured Natalie Tejeda as Harkabeeparolyn. The boy Kawaresksenjajok I couldn't put a finger on, and I couldn't help visualizing a kid I knew in middle school and high school. (It would be pointless to share his name with you; you wouldn't be able to picture him anyway.) The other characters flit in and out of the story, and they are not there long enough to bother with casting, so I just pictured them in general, "that guy" kind of visualizations.

Next up, eventually, I plan to re-read The Ringworld Throne. But not just yet. I might re-read something else instead, just to do something different. Maybe Dune.
Posted by Albatross at 8:13 PM No comments: 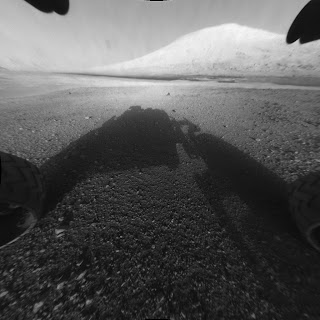 Not just the image, but also knowing how that thing got down to the surface of Mars. I tried to stay up to watch the landing live (well, really, to watch the NASA and JPL guys live; there was a bit of a fourteen minute delay on the landing), but I just couldn't hang. I fell asleep at around 11:30 p.m., and when I woke up, the Curiosity rover had already made it. Heat shield, brake parachute, rocket platform, sky crane ---- all worked perfectly.

And now, there's a mountain to check out.