Stupidest headline of the day

But, I already knew that.

However, Seth Shostak is talking about solar eclipses here, and what makes them so cool on Earth.

Mercury and Venus would be dandy places to see an eclipse (ignoring the lethal weather) since the Sun would loom large in the sky, showing up well in point-and-shoot photos. But neither has a moon. Other planets are saddled with satellites that generally appear either too large in the sky or too small. For example, the four Galilean moons of Jupiter (Io, Europa, Ganymede, and Callisto) are all hefty enough to block the Sun. Unfortunately, they block too much. The prominences and inner corona that are so spectacular during earthly eclipses quickly disappear behind one of these massy moons. ...

Mark yourself lucky to live on a planet where a solar eclipse is both possible and spectacular. And even luckier to be around when jet engines and cruise ships make it easy for thousands of people to journey to any eclipse’s narrow shadow path. For our grandparents and all their ancestors, who mostly died in the villages of their births, the chances of catching a total solar eclipse during a lifetime was about one in seven. Seeing as many as two was about as common as giving birth to quints.

I've never seen a total solar eclipse, but I have seen a couple of partial ones. They are definitely awesome, and, given the way darkness suddenly spread across a bright, sunlit day during an eclipse, I can see how the ancients would have been quite freaked out.

Posted by Albatross at 8:58 PM No comments:

NEW YORK - Scientists have discovered a mutant gene that triggers the body to form a second, renegade skeleton, solving the mystery of a rare disease called FOP that imprisons children in bone for life.

Frightening. But, the good news:

The finding, reported Sunday, may one day lead to development of a drug, not only to treat the rare bone disorder, but more common bone buildup related to head and spine trauma, and even sports injuries, the researchers said.

A letter from the Missouri Republican [Rep. Jo Ann Emerson] to a resident of her district somehow ended with, "I think you're an (expletive).” The offensive word begins with an "a.”

Message to all business correspondence writers: Always check the letters sent out in your name.

Message to all the people who actually write those letters: Don't joke around with your copy. You embarrass your boss. You embarrass yourself. And, you could lose your job, if you're caught.
Posted by Albatross at 7:11 PM No comments:

Shooting for the moon

What's cooler than practicing moonwalks on the bottom of the sea?

Also doing a surgical procedure. On the bottom of the sea. When the doctor is in Canada.

From Tariq Malik at Space.com:

One of the key goals for the NEEMO 9 crew included the assembly and operation of a surgical robot designed to allow physicians to dress wounds remotely with only an Internet link-up between them.

Canadian doctor Mehran Anvari, a veteran of telemedicine experiments with past NEEMO crews, directed the robot to suture a gash inside Aquarius. But instead of working aboard Aquarius, or even aboard a surface ship, Anvari sat at a workstation in the Canadian city of Hamilton, Ontario, where he directs the Center for Minimal Access Surgery at McMaster University.

Long-term moon missions would be safer if astronauts could receive the best health care possible without having to send a range of specialists to take care of any eventuality. The work aboard NEEMO 9 paves the way for surgery on the moon that is performed by doctors on Earth -- which (do I have to say it?) is extremely cool.
Posted by Albatross at 4:56 PM No comments:

Below is a screen capture of Yahoo news, Space and Astronomy, for April 17, 2006. Can you guess what shouldn't belong? 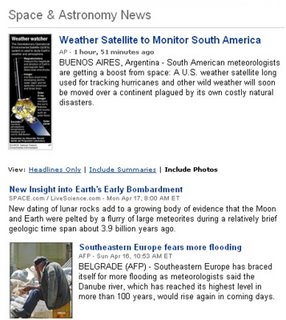 Yes, it's the piece about how southeastern Europe fears more flooding. Hardly something to do with space.

It used to be that, when I would see an incongruous classification such as this, I would just wonder at the wisdom of Yahoo. Now I realize that the "meteor" in "meteorologists" triggers whatever parameters are used to sort out the news items. That explains the incogruity, but it doesn't excuse it. Yahoo should fix its code.
Posted by Albatross at 4:15 PM No comments:

By the way, did I mention that this was cool?

Too bad the place is hell. It would be nice if it could be terraformed. "The Long Rain", it certainly isn't.
Posted by Albatross at 8:42 PM No comments: 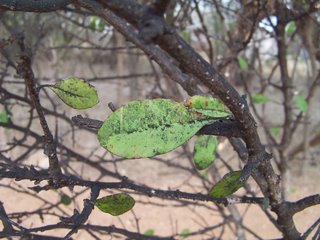 Nothing but some leaves on an early spring morning.
Posted by Albatross at 9:26 PM No comments:

NASA scientists say the collision should excavate a hole about a third the size of a football field and hurl a plume of debris into space. After the crash of the space probe, the mothership that released it will fly through the plume and look for traces of water ice or vapor — similar to NASA's Deep Impact mission last July, which blasted into a comet.

Posted by Albatross at 4:57 PM No comments:

Found in 1970, now made available in English -- The Gospel of Judas has been published.

The newly translated document's text begins: "The secret account of the revelation that Jesus spoke in conversation with Judas Iscariot."

In a key passage Jesus tells Judas, "You will exceed all of them. For you will sacrifice the man that clothes me."

This indicates that Judas would help liberate the spiritual self by helping Jesus get rid of his physical flesh, the scholars said.

I don't think this new information will change the faith of many people. There have been many apocryphal works circulating through the centuries, including other gospels. But I think most Christians dismiss these other works as unimportant, if not distracting from the main meaning of the Christ, the annointed one who was sent to redeem our sins. At least I do. And I think the Gospel of Judas will find a similar fate, despite its new availability in English.

Posted by Albatross at 9:13 PM No comments:

"Would you hire this man?"

Lots of over-educated youths with too much black in their wardrobes are desperate to dress up in balaclavas and bandannas and torch things because (now let me word this correctly) they are disillusioned that their government wants to help them get jobs, because when you get a job there is a big danger you might one day lose it, especially if you are crap at it.

Hm. The French are disillusioned because someone is telling them they need to do a good job or they might be fired. How does that country stay afloat?

And, Hilton's right, what is with all the masks and bandanas? Geez, if you're going to protest, at least have the stones to show your face and take credit for what you're doing. Or just go home.
Posted by Albatross at 5:24 PM No comments: 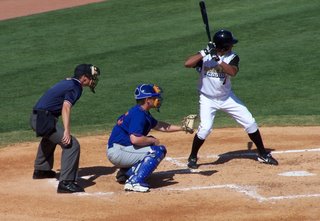 Go Missions!
Posted by Albatross at 9:00 PM No comments:

WASHINGTON - Some congressmen believe the United States and China are in an unacknowledged space race that this country could lose if it doesn't spend more money on the civilian space program. ...

The China space-race discussion was touched off by Rep. Mark Kirk, an Illinois Republican who in February participated in the first U.S. government delegation visit to China's remote space launch facility.

"The American people have no idea how massive the China space program is," Kirk said.

We took on the Soviet Union in a race to the moon and won. It would be a shame if we lost today to China.
Posted by Albatross at 9:28 AM No comments: