My period instrument is bigger than yours ...

.
I don't have a particular fascination with death, nor do I have a strong aversion. I considerate it to be part of our existence, and the way we mourn the passing of a loved one can be as important to our mental health as how we celebrate happy events.

That having been said, I was a bit surprised to discover this practice, the art of photographing the dead with the family, on a favorite site of mine, There, I Fixed It. The pictures at that post are both touching and mildly disturbing. Like this one: 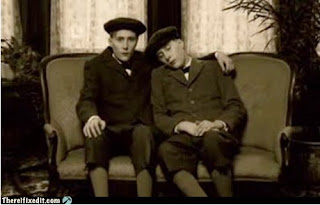 Many of the subjects of the photos were young children, which reflects a definite change in regards to the decrease in the infant mortality rate in developed nations. Being the great equalizer that death is, people of all ages were memorialized this way. The bodies were preserved following certain procedures that are still practiced today with regards towards physical preservation (embalming with arsenic salts, alcohol, and formaldehyde) and dressed in their finest clothes.

Keep in mind that photography in the 19th century was an elaborate process; both time consuming and certainly expensive. For many people this was the only photo that would be taken of them.

I'm glad I learned of this old art. I don't particularly revel in such morbid topics, but I'm not shy, and this practice is moving in a way.
.
Posted by Albatross at 5:58 PM No comments:

Things that make you go "Why?"

.
OK. I like Star Trek. It's very entertaining. (Except for Nemesis!)

On Aug. 22, the Klingon language will be one of three options added to the eight currently available for the self-guided audio tour through the "Nettle Cave." As many as 200,000 people pass through the chambers of this underground labyrinth annually, making it the most visited cave on the continent, Jenolan Caves Reserve Trust officials said in a statement.

"We are poised to boldly go where no other tourist attraction has gone before, with the first cave tour in the world to be available in the Klingon language," Reserve Trust officials said.

OK, this, and exactly this, is why people who are not Star Trek fans sometimes think that all Star Trek fans are such freaks. I like to have fun and all, but really, out of all the blessed languages on the Earth that actually are spoken by humans and carry meaning outside of a fictional space show someone actually chose to use whatever influence they had to convince someone else in an official position to accept Klingon as a legitimate language option on tours of the most-visited cave on the continent?!!

Geez! Elvish would have been a cooler choice.

I've got a lot of stuff happening these days. Blogging may be light for awhile.
Posted by Albatross at 8:32 PM No comments: 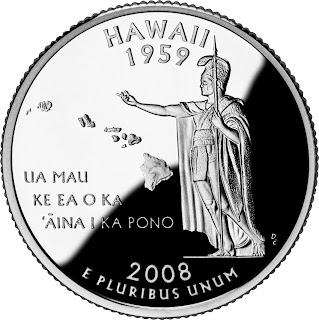 Last but not least -- here's Hawaii.

I really kind of like this design. That representation of King Kamehameha looks downright stately, and I'm not even bothered by the state motto. The outline of the island chain could have been left off because at the scale of U.S. coinage it just looks like so many misplaced dots, but it doesn't detract from the overall look very much.

Well, that's it. I've done all fifty state quarters. I know there are territory quarters out there, and the U.S. has even started a series of quarters featuring national parks, but I think I will take a little break from reviewing for now. There are only six territory quarters, so that shouldn't take me long to do, when I get around to it. And the park quarters have just started and will continue through 2021. I have time to get to those.

But let's hope someone designing those park quarters will run across my state quarter reviews and take some suggestions to heart; there are only so many mushy mountain and tree scenes on our coins that we can stand.
Posted by Albatross at 12:16 PM No comments: 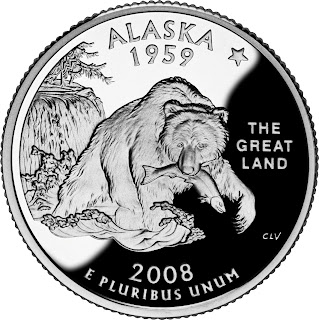 Alaska's quarter design is almost exactly like Washington's design, which isn't a good thing. It could have been a lot better but for the following:

-- The bear is not quite prominent enough. It should have been bigger, with no fish in its mouth.
-- The background earthwork and trees are a mess. They detract from rather than add to the design.
-- The state nickname is uninspiring. It's little more than filler.
-- The splashes of water are barely recognizable as splashes of water. They look more like foliage.


ADDED: I've recently discovered that the reason this design resembles Washington's so much is that they were developed by the same artist!
Posted by Albatross at 5:44 PM No comments:

Traditional musical instruments not challenging enough for you? You could always make up your own. 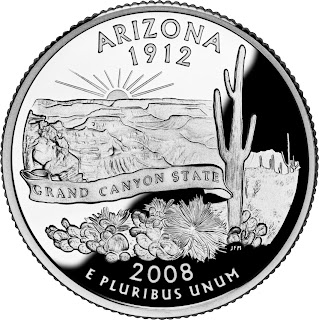 C'mon, Arizona. I heard you really were a gas. But this quarter is screwed up; it's a total mess.

Did you really think you could take the huge grandeur of the Grand freakin' Canyon and fit it all onto a little bitty twenty-five cent piece? Did you? 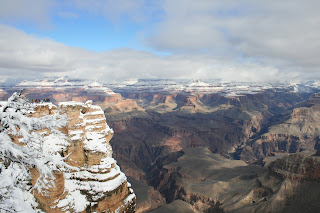 Anyway, there's nothing left to do except mock your lame attempt by throwing on a bit more messiness.

Next: North to Alaska
Posted by Albatross at 5:37 PM No comments: 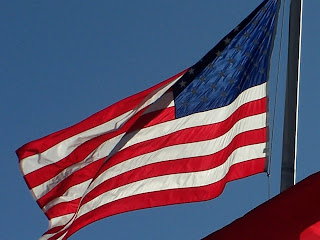 I hope your holiday is festive and safe.
.
Posted by Albatross at 9:42 PM No comments:

Satanists -- you need a better symbol

.
Yes. Thank you, Cracked.com. I am a Catholic, and for many years I have been trying to tell any Satanists I encounter that they have been spinning their wheels with the whole upside-down-cross thing. They need a better symbol for themselves, but they just don't seem to understand that when I mention it to them.

Maybe they will listen to you.

One of the most popular Satanist symbols is the upside down cross, the reasoning behind which seems obvious enough. With the possible exception of that pentagram thing with the goat's head inside it, the inverted cross is the most immediately recognizable symbol of defiance against Christianity. It's certainly the easiest to tattoo onto your own face.

That's pretty hardcore. But there's only one man on Earth who is death metal enough to have an inverted cross carved into his own throne.

If those Satanists had paid attention in Sunday school, they would probably realize that the inverted cross is actually the personal trademark of Saint Peter, the first Pope, and one of the most revered figures in Catholic lore. When Peter was martyred by crucifixion he was said to have requested to be crucified upside down because he didn't feel worthy of dying the same way as Jesus. As a result, many dyed-in-the-wool Catholics actually consider the inverted cross to be a more acceptable thing to attach to your tacky jewelry than a regular right-way-up one.

Also not-really-evil: the pentagram. At least that's what Sir Gawain thought. To him, the five-pointed star was downright holy.

C'mon, Satan worshippers. Come up with your own symbol. The goat head thing is a good start, but you're going to have to work hard to separate it from the whole tradition of cabrito. At least here in South Texas. 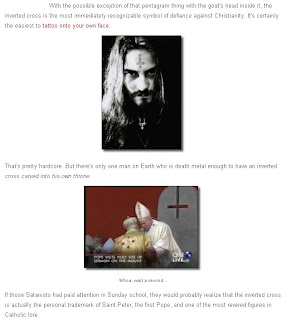