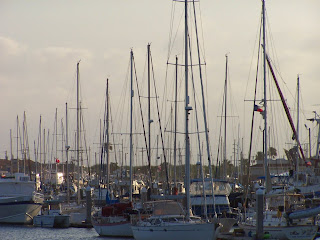 Fishing's over. Sailing's over. Time to pack it in for the day.
Posted by Albatross at 7:37 AM No comments:

Something tells me that the guy in the video can actually play that piece (though not with so many voices). A mind and will that has the patience and creativity to put together such a video also should also have the patience to practice and actually learn the piece.
Posted by Albatross at 6:18 PM No comments:

Do languages have value because they exist?

.
Steven Bird at Language Log talks about Usarufa, a language of Papua New Guinea that is in danger of dying out. He wanted to pass on the seriousness of the language's fate to its native speakers, so he turned to an audio aid.

I played them a recording of the "last words" of the Jiwarli language of Western Australia. After some questioning looks I explained that this language is now dead, and we were listening to its last speaker before he died. As one they all looked down, shaking their heads in disbelief and saying sorry, sorry, sorry…. It was as if I told them a mutual friend had died. They urged me to put that recording on a cassette tape so they could take it back to their village. That way, everyone would surely understand what will happen to the Usarufa language unless there are serious attempts to revitalize it.

This story struck some readers of the Language Log as especially poignant, and it elicited such comments as this:

Thank you for this! I'm often struck by how apparently uncomprehending many people are about the gravity of language death.

The technique you’ve discovered seems to be effective in conveying the gravity of language death to people, and I’d recommend it to anyone else who has trouble convincing a group whose language is endangered.

This made me a little weepy.

These reactions prompted me to pop into the comments section and say this:

I understand that many people, including non-linguists, think it is a bad thing that languages die out, but why do they take it so hard? Is it simply an emotional gut reaction? Does a language — any language, including English — have an intrinsic value simply because it exists? Or, if it reaches the point where there are no more native speakers and it loses its value as a tool of communication, is it just as well that it passes into the realm of history?

I'm not saying this as a troll. I'm truly curious because, even though I appreciate the beauty of well-written words, I also realize that languages die out from time to time, and I don't think humanity is the lesser for it. In fact, we continue to reach for the stars, to better ourselves and our neighbors, and to make grand new discoveries. Think of me as insensitive if you like, but I wonder why the death of a little-used language always so horrifying.

What do you think? Is the death of a language always a horrible thing? Do languages possess a value because they simply exist? Or is a language a neutral tool that is used to pass on information, and when that tool is no longer needed it can be cast aside without emotional attachment?

(Hat tip: Dubbing is Fun)
Posted by Albatross at 6:25 PM No comments:

Squabbling over a word

STOCKTON SPRINGS, Maine -- For nearly a decade, locals here have been fighting American Indians over the name of a dead-end dirt road.

The lane in question, on a woodsy bluff overlooking the ocean, was once called Squaw Point Road. Maine banned the word "squaw" from place names in 2000, in deference to Indians who consider it racist. Names such as Squaw's Bosom Mountain and Little Squaw Brook quietly receded into history.

But residents here played Scrabble with the spelling instead. They renamed the road Squawpoint -- then later, Squa Point and Squapoint, complying with the letter of the law but not with its spirit, critics say.

The resistance prompted the state into action again. This month, Maine lawmakers amended the law to ban public place names that include "the designation 'squa' or any derivation of 'squa' as a separate word or as a separate syllable in a word."

Lesley Cosmano, a retired Chicago schoolteacher who moved here with her husband in 2005, finds the amendment ridiculous. "This means birds can no longer squawk, people can't squabble" and town squares might be outlawed, she says, in her dining room with views of Penobscot Bay -- namesake of one of Maine's largest Indian tribes.

(From the Wall Street Journal)

It's an interesting look into small-town politics.
Posted by Albatross at 12:28 PM No comments:


It's the Moody Blues.

I can't help it, I love to listen to that band! From their hippy-dippy space travel stuff from decades ago through the 1980s synth-fests to wherever they ended up, I can't help grooving when I hear a Moody Blues song. That's odd coming from me. As you may know, if you have been reading this blog for a while, I am a fan of heavy metal (Iron Maiden in particular), and I can thrash with the best of them. That's why I don't share my guilty pleasure too readily. I get some stange looks if I do.

Anyway, I like to listen to the Moody Blues. A lot. And, just to jog your memory if you haven't heard them for some time, here is a brief medley:


There. I've shared. Now you. What's your musical guilty pleasure?
Posted by Albatross at 6:31 AM 6 comments:

.
Here's your chance to share if you dare: As far as music goes, what is your guilty pleasure?

You know what I'm talking about -- that song or band or musical artist that you know you shouldn't like (given your personal tastes in music, and given the subject's badness, wimpiness, overexposure, etc.) yet you do anyway. Perhaps you are a little ashamed of yourself, or perhaps you've come to grips with your choice, but you know you have one. What is it? What is your musical guilty pleasure?

I'll tell you mine shortly.
Posted by Albatross at 5:34 PM 2 comments:

Bringing light to the blind

Visit msnbc.com for Breaking News, World News, and News about the Economy

We are becoming cyborgs, and the future looks good.
Posted by Albatross at 9:11 PM No comments:

.
Ambitious. Wiping out one species so that others can live.

After dropping poison onto the island from helicopter-hoisted buckets for a week and a half last autumn, there are no signs of living rats and some birds have returned, according to the U.S. Fish and Wildlife Service.

Rats have ruled the island since 1780, when they jumped off a sinking Japanese ship and terrorized all but the largest birds on the island. The incident introduced the non-native Norway rat -- also known as the brown rat -- to Alaska.

The $2.5 million Rat Island eradication project, a joint effort between the U.S. federal government, the Nature Conservancy and Island Conservation, is one of the world's most ambitious attempts to remove destructive alien species from an island.

But aren't we all introduced species at one point or another in history? Who says that after over 200 years that the rats didn't have a claim on the island?

Just askin'.
Posted by Albatross at 5:54 PM No comments:

.
I anticipate a very busy week. Blogging may be light for a few days.
Posted by Albatross at 5:24 PM No comments:

.
Was life more dangerous in the old days? And, if it was, did that make it more fun?

Placed below is a portion of Norman Rockwell's 1947 painting Going and Coming. Rockwell is famous for depicting positive scenes of American life in a way that reflected realism and caricature, and this painting is no different. In it, a family -- including the dog and Grandma -- are going out on a fine day to have some fun at a nearby body of water, and you can tell they eagerly anticipate that fun.

But that was the 1940s. They would have had a blast, for sure, but if this scene were to play out today, I don't think they would have had as much fun. That's because the first police car they passed would pull them over and cite them for numerous activities that were once ignored but are now against the law because they are too dangerous. For example:

1. No one's wearing a seatbelt. I don't think there is any jurisdiction in the United States today where it isn't required for at least the driver and front seat passenger to buckle up. However you may feel about mandatory seatbelt usage, the laws were enacted to protect you.

2. The youngest child is not in a car seat. In fact, she's in her mother's lap. Again, the law says you must have young children in car seats for their protection, and it doesn't matter if you're Britney Spears either.

3. Dad is smoking in the car. It's not yet illegal to smoke in your own car with children present, but there are some state legislators who want to make it so. In any case, there is a whole raft of anti-smoking laws everywhere that restrict the use of tobacco because it's viewed as dangerous.

These activities were innocent back in the day, but they are frowned upon (at the very least) today because others are watching out for our safety. We may be more safe these days, but are we having as much fun?

And would Norman Rockwell have as much to paint about?
Posted by Albatross at 10:01 AM No comments: 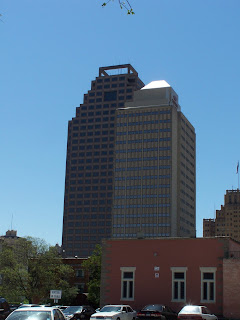 Nothing but a couple of tall buildings on a beautiful day, standing side by side.
Posted by Albatross at 7:48 PM No comments:

.
Since we are creatures of gravity, traveling in the relative weightlessness of space is always going to present a problem. Unless we can develop reliable artificial gravity, we will always have to find ways to address muscle atrophy, sickness, decline in immunity, and other problems. But this is the first time I have heard that we will always need to pack Tylenol on our trips.

Clara Moskowitz of Space.com has the story:

Traveling to space is a lot of fun, but can also be a headache. Literally.

A new study of 17 astronauts found that the majority of them experienced painful headaches when they traveled beyond Earth. The findings prompted doctors to call for designating space headaches as a new "secondary disorder."

Space headaches have been reported before, but until now they were thought to be related to the common motion sickness astronauts experience in space. The new study found that the two maladies are not actually connected.

"Space headaches." I hate Earth headaches. The space variety must be just miserable.
Posted by Albatross at 8:35 PM No comments: