Not only do the evolutionary dead-enders known as pandas have a hard time reproducing, they also seem to find it difficult to eat. Even when food is around.

The [Zoo Atlanta pandas'] diet consists almost entirely of bamboo, but they will eat only about 20 of the 200 or so species that grow in Georgia. What type they like also varies by the time of year. Sometimes the pandas will eat nothing but one variety for a week, then refuse to eat it anymore. (Sound familiar, parents?)

And the bamboo has to be fresh — the pandas turn up their noses at dry or wilted leaves and discolored stalks.

So the zoo relies on a bamboo hunting team to find and harvest local patches of the plant. The bamboo they collect cannot be grown with pesticides or near polluted waterways. And most important, it must be appetizing to the pandas.

The astounding effort humans put forth to keep the panda from dying off is remarkable. What's even more remarkable is how the media feels it needs to be clever and cute whenever reporting on every little quirk of this species.
Posted by Albatross at 6:45 AM No comments:

Just a reminder that Titan, a moon of Saturn, is probably one of the most interesting bodies in our solar system. It's cold, it's hazy, and it's fascinating. 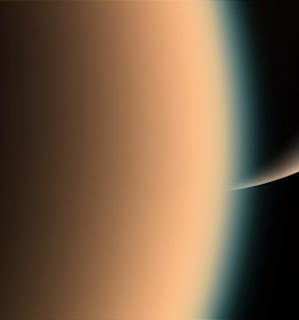 Read more about this image here.
Posted by Albatross at 12:02 PM No comments:

Flying high above the Earth's atmosphere, the Convection Rotation and planetary Transits (COROT) satellite will use a different technique better suited to finding smaller worlds. Called the "transit" technique, it will detect extrasolar planets by measuring the dip in starlight their passage creates as they glide across the face of their parent stars.

COROT's 27 centimeter (10.6 inch) lens will monitor the brightness of the stars, looking for the slight dip in starlight caused by the planet's passage. COROT will be able to monitor hundreds of thousands of stars simultaneously and will turn its unblinking eye toward different parts of the sky for 150 days at a time. COROT is expected to find between 10 to 40 rocky worlds over the course of its two and a half year mission, along with tens of new gas giant planets. ...

In 2008, NASA will launch Kepler, a space telescope that works in the same way as COROT, but which will be able to detect the first Earth-sized planets in similar orbits to our own world.

"The goal of Kepler is to find Earth-sized planets in habitable zones around equivalent Suns, or slightly smaller," said Micheal Moore, NASA's program executive for the mission. "We actually like them a bit smaller than our Sun itself, but basically the same thing."

Let's find those planets, and get busy settling them. In the meantime, we could also work on this.
Posted by Albatross at 5:17 PM No comments: 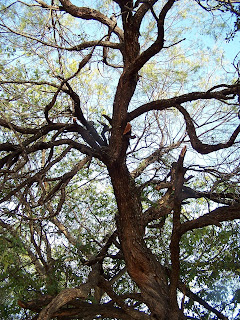 Nothing but a picture of a gnarled tree.

Posted by Albatross at 5:45 PM No comments:

CINCINNATI - A 13-foot boa constrictor wrapped itself around its owner's neck and killed the man in his home, authorities said.

The snake was still strangling Dres when deputies arrived, and the officers had to work with members of an animal protection group to remove the reptile, the sheriff's office said.

Dogs are good pets. Cats marginally so. But snakes? Not really.
Posted by Albatross at 5:36 PM No comments:

WASHINGTON - Though Americans are increasingly pessimistic about the war in Iraq, the Pentagon said Tuesday it is having success enlisting new troops. The Navy and Air Force met their recruiting goals last month while the Army and Marine Corps exceeded theirs, the Defense Department announced.

Maybe there are a lot of other Americans that are not increasingly pessimistic about this war. It would be nice if the media gave more attention to that view.
Posted by Albatross at 5:00 PM No comments:

... European sports cars, and China. Who would have thought they'd all go together?
Posted by Albatross at 6:08 PM No comments:

Well, I guess the kitchen would not have to worry about the presentation too much in a dark restaurant.

Diners at the once-a-week restaurant called "Opaque" are led into a pitch black dining room by the blind waiters who act as their guides for the evening.

The idea of eating dinner in utter blackness may strike many as odd, if not downright unpleasant.

Count me in on that sentiment. Part of the enjoyment of a meal eaten out is how it looks, and part of the dining experience is the place's ambience, not the complete lack thereof. Which is why I shudder at the thought of a pitch-black restaurant. I much prefer a clean, well-lighted place.
Posted by Albatross at 8:50 PM No comments:

"Signs of liquid water add to 'Life on Mars' debate"

Perhaps the best evidence so far for liquid water on Mars. Today, not long ago.

An orbiter going around Mars has photographed gullies which indicated that water had flowed there in the past decade.

"These observations give the strongest evidence to date that water still flows occasionally on the surface of Mars," said Michael Mayer, head of NASA's Washington-based Mars Exploration Program.

Posted by Albatross at 5:42 PM No comments:

Ripping off George Lucas for a fortune cookie message. 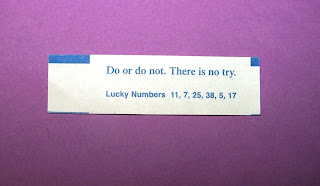 Posted by Albatross at 5:08 PM No comments: