Eugene Volokh makes a good argument for giving a little leeway to the word decimate. As he says, "Etymology is interesting -- but it's not the same as meaning."

I tend to avoid decimate because, even though I know it is commonly used to mean "destroy a significant portion", my mind still gets stuck on the original meaning that meant to kill a tenth of a group of people. To keep my writing clear, I use a different word. But I do not condemn the way others most commonly use decimate. There are other writing bugbears that are more worthy of my contempt.

"Greedy Clerk" in the comments section of the above post illustrates two for me.

Further, one more pet peeve: there is nothing wrong with "splitting" infinitives. English is not Latin. An infinitive in English is generally two words: i.e., to be, not ser. Thus, they can obviously be split. Also, ending sentences with prepositions is not wrong -- sometimes it is awkward not to do so.

Amen.
Posted by Albatross at 4:47 PM No comments:

Giving us too many choices

OK. Which version do I get?

From a PC Pro article by Matt Whipp:

'We live in a digital world that is filled with more information, more things to do and more ways to communicate with others than ever,' said Mike Sever, corporate VP of Windows Product Management and Marketing at Microsoft. 'The PC needs to give people the clarity and confidence to handle this "world of more" so they can focus on what's most important to them. With our Windows Vista product line, we've streamlined and tailored our product lineup to provide what our customers want for today's computing needs.'

From what I can gather, here are my choices the next time I buy a computer:

And, there's even a Starter version. Wow. That's just too many things to choose from.
Posted by Albatross at 5:39 PM No comments: 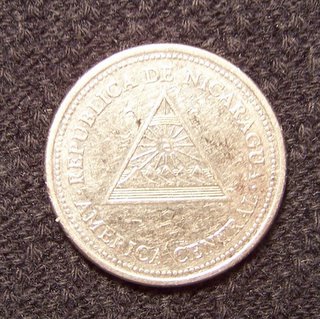 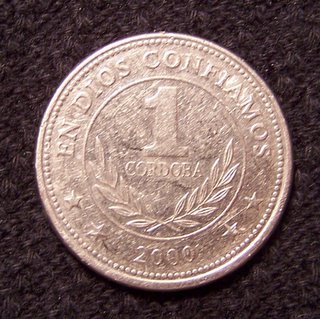 Nothing but a coin from Nicaragua.
Posted by Albatross at 5:18 PM No comments:

Not much chance of life on Venus. The planet is hell.

Surface temperatures are hot enough to melt lead. The surface pressure on Venus is the crushing equivalent of being nearly a mile deep in Earth's ocean. The landscape, covered in volcanic rock, is desolate and waterless, but rich in sulfur. Venus's atmosphere is more than 96 percent carbon dioxide, with 3 percent nitrogen and traces of other gases.

Enshrouding Venus are three distinct cloud layers. Water vapor there ranges from a few parts per million at the top of the cloud deck to a few tens of parts per million at the base. Cloud droplets, however, are formed of extremely concentrated sulfuric acid. Now toss in for good measure a high flux of solar ultraviolet radiation that floods the cloud deck. [emphases added]

But [planetary scientist at the Southwest Research Institute David] Grinspoon added that if there is life in the clouds of Venus, “then it exists in conditions which do not overlap conditions in which even extremophile terrestrial organisms can survive.” This life, he pointed out, would be so alien to Earth life that it and Earth life could not threaten each other.

That's good to know. Of course, a life form adapted to living in clouds of sulfuric acid wouldn't be very cuddly, either. So, we'd probably leave each other alone for the most part.
Posted by Albatross at 9:16 PM No comments:

David Edmonson has resigned as CEO of Radio Shack. For lying on his resume.

About being well-versed in religion.

Edmondson had claimed that he received degrees in theology and psychology from Pacific Coast Baptist College in California, which moved in 1998 to Oklahoma and renamed itself Heartland Baptist Bible College.

The school's registrar told the [Fort Worth] Star-Telegram that records showed Edmondson completed only two semesters and that the school never offered degrees in psychology. The school official declined to comment to The Associated Press.

Edmondson said last Wednesday he believes that he received a theology diploma called a ThG, but not the four-year bachelor of science degree listed on his resume. He could not document the ThG diploma. [emphases added]

Con-men have no scruples.
Posted by Albatross at 4:38 PM No comments:

Those stars that are the best candidates for having earth-like planets and/or extraterrestrial life.

The list was put together by Margaret Turnbull of the Carnegie Institute of Washington. (Read more about it at Alan Boyle's column here.) She thinks that these stars are good places to look for new planets and to listen for possible signals from other civilizations. And her list is apparently anything but arbitrary.

Turnbull's list serves as a device for targeting the search as well as focusing the imagination. She started out with a database of 19,000 stars surrounded by "habitable zones" where life could conceivably survive. Then she zeroed in on stable stars that were at least 3 billion years old, with masses no more than 1.5 times that of our own sun.

The stars also had to have at least 50 percent of the sun's iron content, because astronomers believe that stellar systems need a minimum of heavy elements in order for planets to form.

Sounds good enough for me. Turnbull also seems to like her work very much.

"These are places I'd want to live if God were to put our planet around another star," she explained.

Spoken like true, starry-eyed dreamer.
Posted by Albatross at 8:08 PM No comments:

Looking out for the bad guys 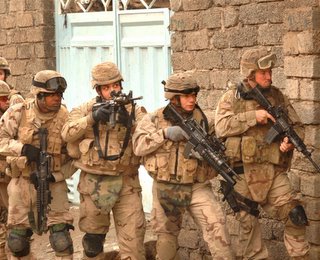 Be careful, guys. And keep up the good work. We appreciate your efforts.

Absolutely cool.
Posted by Albatross at 5:28 PM No comments:

Coin from the Korean peninsula 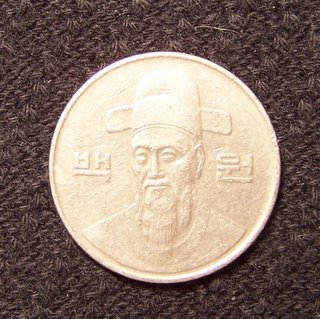 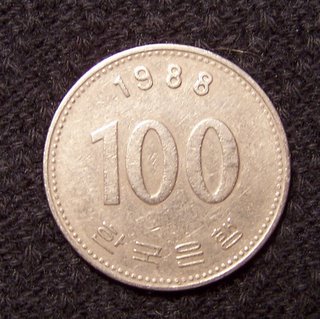 Nothing but a coin from South Korea.
Posted by Albatross at 8:52 PM No comments:

NASA has come up with six new contests to stimulate bright minds into developing new space technologies. This is a cool move on the agency's part.

Planned contests include the development of:

I, for one, am encouraged by NASA's willingness to work with the private sector in developing the technologies that will be vital to future space exploration. I like the idea of the contests to challenge individuals and companies to develop new inventions for space travel, and NASA deserves a pat on the back for encouraging potential contestants to help set the boundaries of the competitions.

The current draft rules for the six new contests were developed by in-house by NASA personnel, [program manager for the Centennial Challenges effort Brant] Sponberg said, adding that before the agency launches the competitions officially, feedback from those who will compete in them is vital. “The whole idea is to go out eternally and to have the people competing for this, or whoever, let us know what needs tweaking.”

No longer insular, NASA embraces entrepreneurs. Let's see more of it.
Posted by Albatross at 9:08 PM No comments:

Free speech is under attack around the globe, by Muslims in the Arab world and by drug lords in the New World.

“I say again to organized crime: You will not make the Mexican people yield,” [Mexican President Vicente] Fox told reporters in the Pacific state of Sinaloa.

Except for newspaper employees, apparently.

Let's hope the U.S. press does not go weak-kneed in the face of such criminal intimidation. Now, more than ever, we need free speech, and the American media outlets should be leading the charge.
Posted by Albatross at 4:41 PM No comments: 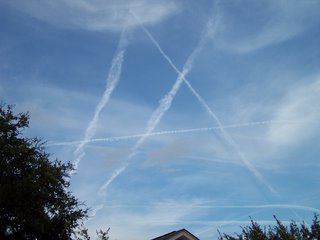 Nothing but a bunch of contrails criss-crossing the sky on a bright afternoon.
Posted by Albatross at 9:18 PM No comments:

Good news for the space boys.

If it were me, I would swap the destinations for the $3.9 billion and the $5.3 billion. We need to start moving out toward the stars, and we need new ways to do it. And, it takes funding.

Now, about that space elevator --
Posted by Albatross at 9:01 PM No comments:

When you cut yourself, you bleed, and that blood forms a scab to seal the wound and help it heal. It's possible that a similar process could be used to protect spacecraft.

From Tariq Malik of Space.com:

[Ian] Bond [of England's University of Bristol] and his colleague developed a similar system, but replacing blood with resin and veins with tiny glass tubes, to fill in cracks or small holes in satellite "skin" as part of a European Space Agency (ESA) program to study technology for self-healing spacecraft. By closing small cracks or micrometeorite punctures themselves, satellites could stave off more serious structural problems the initial damage may lead to, researchers said.

The future is upon us. Bleeding satellites.
Posted by Albatross at 7:23 PM No comments:

Giving it to the insurgents

Here's a picture that shows our resolve, and why they will never be able to best us in a straight fight. As hard as they hit us, we will still give it back to them. With defiance.
Posted by Albatross at 7:13 PM No comments: