Not long ago, the wife bought a set of Christmas CDs. Each disk represents a different style of music, and my eye was caught by the cover art of the rhythm-and-blues disk. 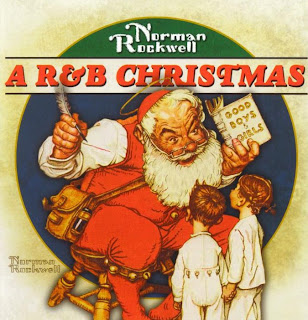 I'm not really a prescriptivist, but the choice between "a" and "an" is pretty clearly determined by the sound of the word or letter following it, not the letter itself. As such, this collection of Christmas tunes should have been titled "An R&B Christmas" instead.


Don't get me wrong, I'm not going to claim the world is coming to an end over such small errors in English, but I always thought the distinction between "a" and "an" was rather instinctive with native speakers. Perhaps I'm mistaken, or perhaps this CD was manufactured in some place where English is not the primary or preferred language.


Yep, I was right. I just checked. This CD was made in Quebec.
Posted by Albatross at 5:05 PM No comments:

That's all.
Posted by Albatross at 6:07 AM No comments:

Love the pandas, but don't hug them. Really, please, don't.

BEIJING - A college student in southern China just needed a hug, but he probably shouldn't have picked a panda for his warm and fuzzy moment.

Instead of a hug, the panda bit the student after he broke into the animal's zoo enclosure.

The official Xinhua News Agency reports the hospitalized student later said the panda was so cute and cuddly he never expected to be bitten.

Remember, pandas are wild animals, not teddy bears! They don't love you, and they never will, no matter how much you want to save them and hug them and make them breed when they don't want to!

If you want love, save a dog from the pound. Or just be a friend to someone who needs one.
Posted by Albatross at 12:46 PM No comments:

When you are a police officer, and a dog at a suspect's home attacks you, I think most people would expect you to dispatch that dog quickly with your weapon.

See, I used a euphemism. I used dispatch rather than kill or slay. That seems more apt to me than what an SAPD sergeant said to explain one of his fellow officer's actions.

SAN ANTONIO -- A San Antonio police officer shot and killed a dog Thursday during a search for two robbery suspects on the city's west side.

When some other officers surrounded the home, the homeowner's dog came out and charged at one of the officers, said Sgt. Lloyd Jackel of the San Antonio Police Department.

"He hollered at the owner to secure the dog three times," Jackel said. "The owner was attempting to come out and do that, but the dog got too close and the officer felt threatened, (so) he had to come out and euthanize the dog." [emphasis added]

Euthanize normally means to put an animal out of its misery or to put it down in a painless manner. Now, don't get me wrong, I don't blame the police officer for shooting the dog, but I don't think euthanize is the right word to use here. The bullet probably hurt a bit, and I don't think the dog was suffering to begin with. So, if I were the sergeant, I would have just said, "He had to come out and kill the dog for the safety of everyone involved." I think that's a good enough word.
Posted by Albatross at 4:30 PM No comments:

Girders captured in the morning light. 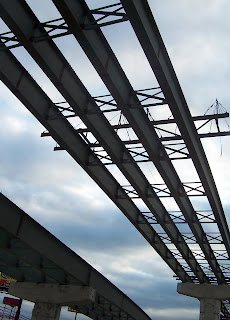 Posted by Albatross at 5:24 PM No comments:

Remembering those who served 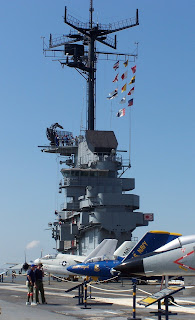 Thanks to everyone who wore the uniform.
Posted by Albatross at 5:57 AM 1 comment:

Language quote of the day

The difference between actual things and the words people use to signify them, as explained by a medieval theologian.

Hugh of St. Victor, from the Didascalicon

A bit of Platonism going on there, but that's no surprise. A lot of old Western thinkers loved that ancient Greek thinker.
Posted by Albatross at 9:14 PM No comments: 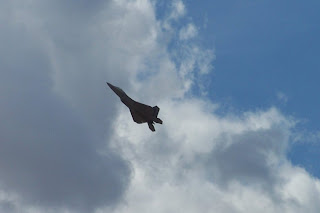 Yes, they're loud.
Thanks to the folks at Lackland AFB for a wonderful air show November 1 and 2, 2008.
Posted by Albatross at 4:46 PM No comments: