We went out to Randolph AFB this morning, and we saw lots of things. Things that looked like this: 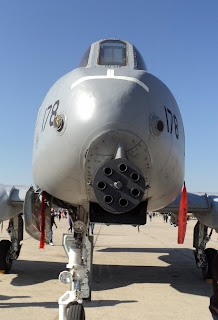 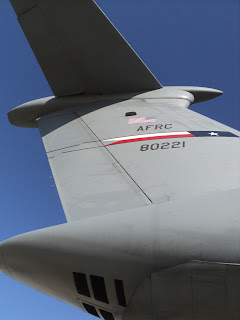 We also saw the coolest F-16 ever to split the air on this planet. 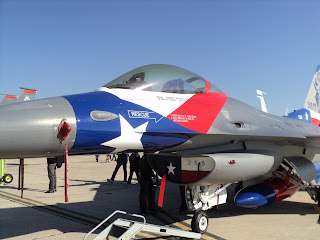 And the mark of possibly the most dangerous Punisher fan around. 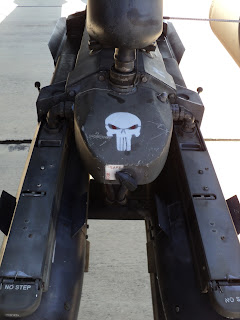 And we saw a bit of history, too, in the form of the quintessential bomber of World War II. 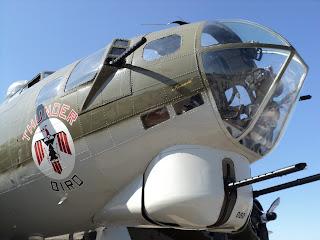 And we saw a few more historical bombers, one of which could not be outdone in the patriotism department. 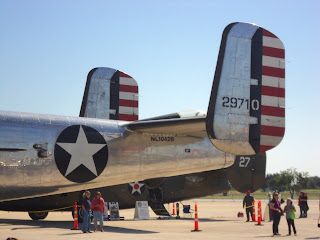 And above all, it was perfect weather. Cool in the morning, clear, warming into the afternoon, and nothing to block your view of aviation prowess.

Or just a cop-out because the word's subtle meanings are too hard to convey on an air freshener can? 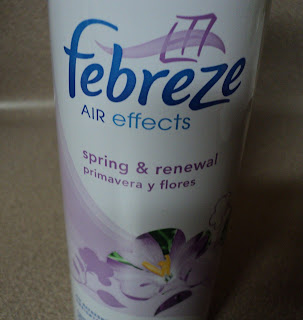 I'm not fluent in Spanish, but I know enough to know that this translation is a cop out. "Spring & renewal" is certainly a masterful stroke of marketing for the English language, and it works very well on this can of product. It sounds good, it sounds fresh, and who wouldn't want to be renewed every time they spritzed a bit of sweet smelling stuff into the air?

But "renewal" doesn't translate well into Spanish. The closest word to it is "renovación", and I get the feeling that the marketing types at Febreze felt that they couldn't put that word directly below the English word because it would remind English-speakers of home renovations (surely a stressful and dusty activity) rather than pleasant, fragrant renewals.

So they picked the best word they could come up with that conveys nice, pleasing scents. "Flores". Which means "flowers". It's a nice word, but it certainly doesn't mean "renewal". And I don't blame the marketers for choosing that word. Explaining in Spanish the exact concept of renewal would result in clunky phrases or long, letter-cluttered words (like "rejuvenecimiento"), and nobody wants that on their air freshener cans. They'd prefer to think of sweetly scented things, like flowers. And they certainly don't want to think too much about what it is they are supposed to be smelling.

So, Febreze Marketing Department, it is a translation cop out. I know that. But it is an understandable one, and I don't fault you for it.
Posted by Albatross at 9:15 PM No comments:

Vespasian was square-bodied, with strong, well-proportioned limbs, but always wore a strained expression on his face; so that once, when he asked a well-known wit: 'Why not make a joke about me?' the answer came: 'I will, when you have finished relieving yourself.'

That joke would be mildly funny if were to take place today, but it's an absolute riot given that it was told a couple of millennia ago about one of the Roman emperors, to that emperor's face, and recorded for all of posterity by one of the world's eminent historians, Suetonious.

And it says something positive about Vespasian's character and sense of humor that he did not have that "well-known wit" killed immediately. (Perhaps he did, but there's no indication of that here, and I'm going with the thought that Vespasian followed it up with, "Ya got me there!") 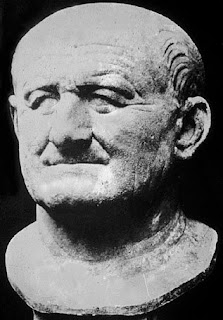 OK, I'm finished. You may tell your joke now.
Posted by Albatross at 8:31 PM No comments:

It's good to hear NASA admitting that the private sector should be a part of future space exploration. And it's even better to hear that this involvement is now being encouraged.

LAS CRUCES, N.M. — For NASA to achieve any of its lofty goals for the future, the commercial space industry must succeed, NASA deputy administrator Lori Garver said.

The space agency has bet big that private spaceships will be ready to carry cargo and astronauts to orbit soon. The future of the International Space Station, as well as the future of NASA's robotic science missions and human deep space ambitions, depend on that outcome, Garver said yesterday (Oct. 20) here at the International Symposium for Personal and Commercial Spaceflight.

"In order to make good on the entire plan, it is this part of the plan that must be successful," Garver said.

Too bad it took the forced retirement of the Space Shuttle to make this happen. But, hey, if that's what it took, then so be it. Let private companies start contracting for launches, and let's not rely on the Russians anymore than we absolutely have to.

Especially when it comes to getting into space.
Posted by Albatross at 9:22 PM No comments:

As for Augustus' attitude to religion: he is recorded to have been scared of thunder and lightning, against which he always carried a piece of seal-skin as an amulet, and to have taken refuge in an underground vault whenever a heavy storm threatened -- because, as I have already mentioned, he had once narrowly escaped being struck on a night march which frightened him badly.


I'm not going to comment on Augustus's fear of lightning and thunder -- or even on the curious notion that such a phobia can adequately sum up any person's attitude toward religion -- but I do wonder about the superstition of protecting yourself from stormy weather with a piece of seal skin. I have never heard of this belief, but I suppose there's really not much difference between that and carrying around a rabbit's foot for good luck.

Who knows? The Romans may have been right about seal skin. If so, then there are a lot of Canadians who should fear no thunder. 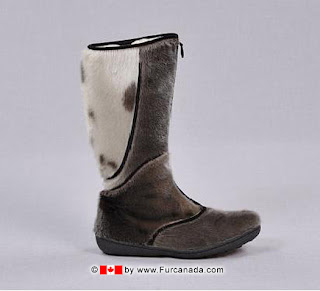 Or cold weather.
Posted by Albatross at 8:47 PM No comments:

As a young man [Augustus] was betrothed to the daughter of Publius Servilius Isauricus, but on his reconciliation with Mark Antony, after their first disagreement, the troops insisted that they should become closely allied by marriage; so, although Antony's step-daughter Claudia -- borne by his wife Fulvia to Publius Clodius -- was only just of marriageable age, Augustus married her; however, he quarrelled with Fulvia and divorced Claudia before the union had been consummated. [I wonder what they were waiting around for. A quarrel? --ed.] Soon afterwards he married Scribonia, both of whose previous husbands had been ex-consuls, and by one of whom she had a child. Augustus divorced her, too, 'because,' as he wrote, 'I could not bear the way she nagged at me' -- and immediately took Livia Drusilla away from her husband, Tiberius Nero, though she was pregnant at the time. Livia remained the one woman whom he truly loved until his death.


Well, it took him awhile, but it seemed Augustus found his true love at last. 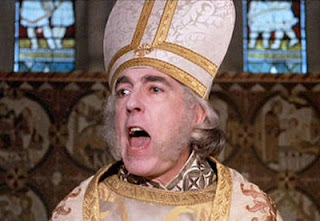 These seem like messy marriages for Augustus, but they are no more numerous or scandalous than any you might see with modern-day celebrity relationships, and at least there don't seem to be any murders or mysterious suicides involved. (Even when Augustus became thoroughly disgusted with his daughter, Julia, later in life, he sent her into exile rather than execute her.)

By light of his familial relations alone, Augustus seems to be quite a bit more noble than Caesars to come. Sadly, though, that's not that difficult a goal to achieve.
Posted by Albatross at 9:29 PM No comments:

The moon is a rich mistress

Why are we not yet going back to the moon?

A new map of the moon has uncovered a trove of areas rich in precious titanium ore, with some lunar rocks harboring 10 times as much of the stuff as rocks here on Earth do.

The map, which combined observations in visible and ultraviolet wavelengths, revealed the valuable titanium deposits. These findings could shed light on some of the mysteries of the lunar interior, and could also lay the groundwork for future mining on the moon, researchers said.

"Looking up at the moon, its surface appears painted with shades of grey — at least to the human eye," Mark Robinson, of Arizona State University, said in a statement. "The maria appear reddish in some places and blue in others. Although subtle, these color variations tell us important things about the chemistry and evolution of the lunar surface. They indicate the titanium and iron abundance, as well as the maturity of a lunar soil."

Furthermore, Apollo data indicated that titanium-rich minerals are more efficient at retaining solar wind particles, such as helium and hydrogen. These gases would likely be vital resources in the construction of lunar colonies and for exploration of the moon, the researchers said.

We need to be up there mining that stuff someday. Hopefully sooner rather than later.
Posted by Albatross at 6:58 PM No comments:

Heavy metal is easier than you think

In fact, it's child's play.

Some aspects of [Tiberius's] criminal obscenity are almost too vile to discuss, much less believe.


I will leave it at that. Suetonius goes into way too much detail for me to comfortably post the subsequent sentences here. Even Project Gutenberg saw fit to excise the worst bits from their online reader version of The Twelve Caesars. So if you ever find this passage to read, read it at your own risk.

You can't unread it. And you will never get it out of your mind.
Posted by Albatross at 8:15 PM 2 comments:

So the internets are brimming over with sadness now that Steve Jobs has passed away, the voices almost universally singing his praises and lamenting the passing of his greatness. I won't, though.

I'm not going to speak ill of the dead. In fact, I will acknowledge that Jobs was a very shrewd businessman, despite his aura of "coolness". And he built a very fine company. But I will say this: I have never owned an Apple product. Ever. And I even stopped using iTunes a while back because using Amazon to purchase music was easier and cheaper.

And I don't feel as if I've missed out on anything.
Posted by Albatross at 7:28 PM No comments:

When the moon shone full and bright [Caligula] invited the Moon-goddess to sexual intercourse in his bed; and during the day would indulge in whispered conversations with Capitoline Jupiter, pressing his ear to the god's mouth, and sometimes raising his voice in anger. Once he was overheard threatening the god: 'If you do not raise me up to Heaven I will cast you down to Hell.' Finally he announced that Jupiter had persuaded him to share his home ....


And who would argue with a god? If Jupiter wanted Caligula to come live with him, then Caligula should go live with him, right? After all, he was in the god's good graces, given that the deity was willing to listen to him on a daily basis and even put up with the little emperor's petulant demands.

No word on whether the Moon took him up on his offers, though. 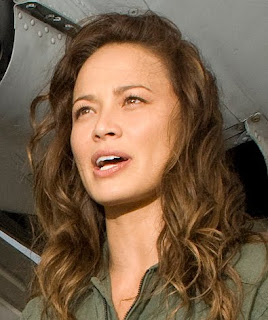 Not sure if she was willing.
Posted by Albatross at 8:10 PM No comments:

Claudius fell so deeply under the influence of these freedmen and wives that he seemed to be their servant rather than their emperor; and distributed honours, army commands, indulgences or punishments according to their wishes, however capricious, seldom even aware of what he was about. I need not dwell on matters of lesser importance: how he revoked grants, cancelled edicts, brazenly amended the texts of letters-patent he had issued, or even openly substituted new versions for the old. Suffice it to record that he executed his father-in-law Appius Silanus; Julia, daughter of Tiberius' son Drusus; and Julia, daughter of his own brother Germanicus -- all on unsupported charges and without the right to plead in self-defence.

Claudius, like most emperors, is probably remembered more for his negatives than for his positives (and there is no doubt that he accomplished some good things for the empire, and there have been some efforts to rehabilitate his image). But his proclivity to being influenced by his lessers in ways that resulted in profound consequences (such as family murder) is hardly the mark of an inspiring leader. 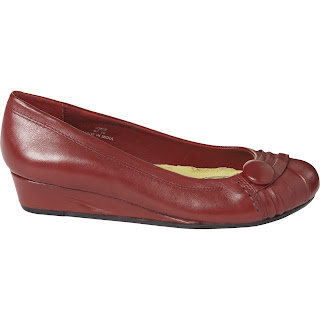 Looking like a British shoe doesn't help, either.
Posted by Albatross at 8:56 PM No comments: