All the news that's fit to make up

The New York Times contains a brief article entitled One Pot describing the Spanish dish known variously as cocido or olla podrida literally "rotten pot" According to the dictionary of the Real Academia Española, podrida may have an admiring connotation, similar to the use of "filthy rich" in English. Curiously, instead of the correct olla podrida, the article gives the name of the dish as olla poderida, which it explains as a derivative of poder "strength", because it gives you strength.

Reader Jim Gordon wondered about this and emailed the author of the article. Her response: she and her consultants and editors were aware of the correct name and etymology but thought that some readers might be put off by the notion of rotten food, so they changed the name a little and made up a fake etymology. It seems clear that they were not trying to deceive anyone with evil intent, but I am still taken aback that a respectable newspaper would make up a fake name and etymology.

I am taken aback, too. But I guess I won't be surprised by anything that's printed in the "Gray Lady" anymore.
Posted by Albatross at 7:22 PM No comments:

Our solar system's ordinally first planet is getting smaller! Apparently.

WASHINGTON - The first pictures from the unseen side of Mercury reveal the wrinkles of a shrinking, aging planet with scars from volcanic eruptions and a birthmark shaped like a spider.

Some of the 1,213 photos taken by NASA's Messenger probe and unveiled Wednesday help support the case that ancient volcanoes dot Mercury and that it is shrinking as it gets older, forming wrinkle-like ridges. But other images are surprising and puzzling.

Check out a lot more images at Messenger's Web site.
Posted by Albatross at 8:18 PM No comments:

Everyone, keep your heads up and your eyes and ears open. The sky may be falling.

The satellite, which no longer can be controlled, could contain hazardous materials, and it is unknown where on the planet it might come down, they said. The officials spoke on condition of anonymity because the information is classified as secret. It was not clear how long ago the satellite lost power, or under what circumstances.

I like how the "officials" told this story only if their names were kept secret because the information itself is supposed to be secret. Chickens. If they were truly concerned more for the safety of their fellow man than for their jobs, they would have let their names be used. Besides, it's not as if their sharing of the information does a fat lot of good. They don't know a lot about the satellite other than it will come back to earth sometime somewhere. That helps nobody very much except to say, Watch out! The sky may be falling.
Posted by Albatross at 5:26 PM 2 comments:

The extinction of languages

Sally Thomason posts at Language Log about the death of an obscure language.

I just heard on NPR that Marie Smith Jones, the last speaker of the indigenous Alaskan language Eyak, has died at 89. There's an AP article about her here: she was the last full-blooded Eyak; none of her numerous children learned Eyak because, as one of her daughters put it, they "grew up at a time when it was considered wrong to speak anything but English." Michael Krauss, a professor emeritus at the University of Alaska Fairbanks and the world's most prominent expert on Native Alaskan languages, worked some years ago with her and two of her relatives to compile a dictionary and grammar of her language, as well as a collection of Eyak stories. But for the past fifteen years, the AP quotes Krauss as saying, Jones was "the last of her kind...With her death, the Eyak language becomes extinct."

Is the dying out of a language automatically a bad thing, especially if only one or two people actually speak the tongue? What made Eyak so special that its loss should be mourned?

I'm not trying to be an English language snob here (though I'm fully aware that I may come across that way), but I truly am intrigued by the notion that a language's preciousness could be measured by the declining number of people who speak it natively. The fewer people, the more precious the language, apparently. But that can't be all of it. If that were so, then any number of extinct languages could be hailed and mourned.

The reason for the regretful tone of Thomason's post must be that Eyak was supplanted by English, in which case I see no real reason for mourning the loss outside of the tired denouncements of colonialism. This comes from a man of Irish descent. I know not a word of the Irish language, yet I do not feel any particular personal loss for not knowing the tongue, and I doubt I would be very sad if Irish actually disappeared from the Earth. I am fluent in English, which is actually my native tongue, and I have studied the language extenstively and have a healthy respect for its complexities. And this is the language of the people who historically oppressed my people. Is this a particular bias? Does anyone think I'm wrong because I like English and I don't hold affinities for little-known languages?
Posted by Albatross at 7:13 PM No comments:

Cruise: "I think about those people out there who are depending on us."

Because he knows better.

Scientology -- the cult of ego.
Posted by Albatross at 5:17 PM No comments:

LONG BEACH, Calif. - A Boeing-built satellite for mobile voice and data services was placed in orbit Tuesday by a rocket launched from a floating platform in the Pacific Ocean.

The launch by Long Beach-based Sea Launch Co. was "perfect," said Sea Launch spokeswoman Paula Korn. Boeing, which built the satellite in El Segundo, Calif., said it was "healthy and operating as designed."

The Sea Launch system takes advantage of a principle of physics that allows a rocket launched at the equator to carry a heavier payload into orbit than it could from elsewhere on the Earth's surface.

The mission was the first for the Sea Launch international partnership since an explosion moments after ignition in January 2007 destroyed a satellite intended for Netherlands-based SES New Skies.

Here's hoping for a lot more successful launches.
Posted by Albatross at 8:59 PM No comments:

Aw, too bad. This would have been cool, especially since we have so many eyes on the Red Planet right now.

PASADENA, Calif. - Scientists tracking an asteroid approaching Mars say that an impact with the Red Planet has become less likely. Refined estimates of the asteroid's orbit were made using new observations from a telescope at the Calar Alto Observatory in Spain, according to the Near-Earth Object Program at NASA's Jet Propulsion Laboratory.

The impact probability fell to 2.5 percent, the NEO office said in Jan. 8 update posted on the NEO Web site. The miss distance was holding steady at about 30,000 kilometers, or 18,600 miles.

Oh well, maybe next time. But this was definitely cool.
Posted by Albatross at 5:20 PM No comments:

I know content providers for Web sites -- especially news sites -- are often under tight deadlines, but that's no excuse for the story from WOAI below, which is just an example of sloppy writing. 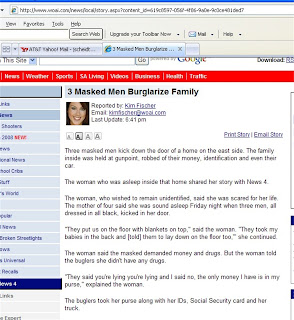 Three masked men kick down the door of a home on the east side. The family inside was held at gunpoint, robbed of their money, identification and even their car.

The woman who was asleep inside that home shared her story with News 4.

The woman, who wished to remain unidentified, said she was scared for her life. The mother of four said she was sound asleep Friday night when three men, all dressed in all black, kicked in her door.

"They put us on the floor with blankets on top," said the woman. "They took my babies in the back and [told] {These brackets in original. --ed.} them to lay down on the floor too,'" she continued.

The woman said the masked [men] {These brackets mine. --ed.} demanded money and drugs. But the woman told the buglers she didn't have any drugs.

"They said you're lying you're lying and I said no, the only money I have is in my purse," explained the woman.

The buglers took her purse along with her IDs, Social Security card and her truck. [Emphases added]

Once is a mistake. Twice is sloppy. Unless, of course, the burglars were tooting their own horns.
Posted by Albatross at 5:55 PM 2 comments:

NASA has had its successes and failures, but the organization should always hold up the Spirit and Oppurtunity rovers as one of their greatest accomplishments.

From Dave Mosher of Space.com:

Two robots the size of golf carts were given 90 days to squeeze as much science as possible from the barren, dust-swept terrain of Mars. After that, scientists expected nothing more from them than death.

Nearly four years after their warranties expired, however, the Mars Explorations Rovers (MERs) "Spirit" and "Opportunity" continue to play productively in the red dirt.

Spirit celebrates its fourth anniversary of Martian work on Jan. 4, the day it landed in 2004, followed by Opportunity on Jan. 25. Those four Earth years since landing convert to 2.25 Martian years, or 1,422 Martian days called "sols."

"We never thought we'd still be driving these robots all over Mars," said Mark Lemmon, a planetary scientist at Texas A&M University and member of the rover science team. "We joked about driving Opportunity into Victoria Crater, but now we're there, and we're looking at doing even more science. Each day they still work is an amazing one."

Our conception of Mars will never be the same.
Posted by Albatross at 11:16 AM No comments: