I'm going on another, short blogging hiatus. February was crazy busy, and I thought I would have a reprieve in March but it's actually shaping up to be even busier, what with my own kids' stuff and my own family members to keep track of and even some friends who need a helping hand from time to time. In short, it's a very busy time in the household.

I fully intend to be back, hopefully with a quieter April. In the meantime, here is a photograph of a repurposed tractor seat for you to enjoy. 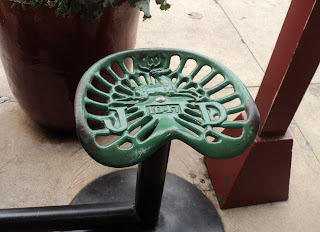 Posted by Albatross at 9:35 PM No comments:

What I just finished reading

I read this book on a recommendation from Alan at Blogonomicon. It's a work of hard science fiction, which means it portrays situations based on real scientific principles and theories rather than "soft", magic-like science that gives you convenient plot devices such as transporters, warp drives, and midichlorians. Hard science books don't always make for the best of stories, but they are usually very interesting anyway. As long as they are well written and don't read like textbooks.

Dragon's Egg certainly doesn't read like a text book, but it is also not the most exciting of tales. It tells the story of a neutron star upon which life has formed. The dominant animal species on Dragon's Egg (the name of the star) is the cheela, and they live at a highly accelerated rate compared to humans.

As the neutron star approaches our solar system in 2050, a human science expedition is launched to study it. As the humans map the the star they make the startling discovery that there is a civilization on the surface, one that is capable of building large structures. The cheela take notice of the human space craft in the sky, and eventually they work out a system of messaging that allows them to communicate in a clunky way. (The human messages appear very slow and drawn out to the cheela, and the cheela messages have to be slowed down by a computer for the humans to understand them.)

The humans transmit as much information as they can to the cheela, including the entire contents of an encyclopedia. Even though it takes the humans dozens of hours to transmit all this data, to the cheela it is several lifetimes. In the course of one day, the humans observe the cheela as they absorb human knowledge, grow from a clan society to one of empire, and fianlly  take to the stars, surpassing even the humans in their knowledge of the universe. The cheela even give back some of what they have learned, which proves to be beyond the comprehension of their human friends.

Very heady stuff. But it's easy to read, too. You don't need a degree in astrophysics to appreciate the theories explored in this book (though it might help), and many of the cheela characters are interesting in their own right, despite being little blobs with twelve eyes. But, in all, the story is not compelling, and the human characters are virtually faceless despite the author's attempt to flesh them out. We see many generations of development in the cheela, but nothing really happens on board the science ship except the gathering of data and the transmission of information. There's a bit of drama involving some equipment work outside the ship, but it doesn't last long, and there's no real sense of urgency in the episode. In short, this is a story of the cheela, and the humans are there just as a framework.

If you are interested in how the universe works (as I am), you will probably enjoy reading this book (as I did). But if your sci-fi fare tends to run toward Star Wars or Battle Star Galactica (either incarnation will do), you might want to steer clear of Dragon's Egg.
Posted by Albatross at 8:53 PM No comments:

Space just above earth is crowded with junk. How cool would it be to have a spacecraft that could fling that junk back down to Earth and do it in a cost-effective and fuel efficient manner?

It would be way cool, that's what. And the Aggies are proposing just that as a way to declutter Earth's orbits. And they are calling it TAMU Sweeper with Sling-Sat.

Posted by Albatross at 8:29 PM No comments: