Because the Jews at Rome caused continuous distubances at the instigation of Chrestus (i.e., apparently Christ, who had been crucified in the reign of Tiberius), [Claudius] expelled them from the city.


At least Claudius merely expelled the Christians. Nero had an entirely different way of dealing with them. 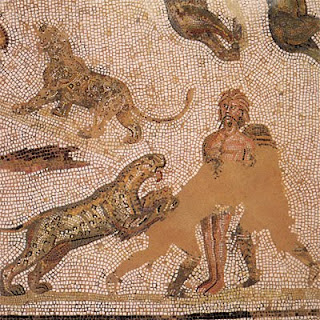 Death by jaguar. While being held by Predators.
Posted by Albatross at 7:00 PM No comments:

What I finished reading recently 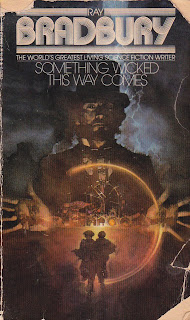 It's been ages since I last read this book, possibly even since I was a child. And though I generally like Ray Bradbury (and count The Martian Chronicles as one of the most influential science fiction books I have read) I remember not liking this particular book very much when I read it in the past. So, when I found this copy in an old box while doing some recent cleaning, I decided to give it another try.

And you know what? I wasn't disappointed. In fact, I liked it better this time around. Maybe it's because I'm older and I'm a father myself, so I can relate a little better to the father/son dynamic that is core to the story. Or maybe it's because I've developed my reading skills over the years and can appreciate Bradbury's turns of phrase more. Whatever the reason, I really found Something Wicked This Way Comes far more entertaining as an adult than I did as a child.

Also, I saw the movie based on this book back when it came out in 1983, and I remember not being impressed by it, especially after I was completely enthralled by the TV mini-series version of The Martian Chronicles. I think I was initially put off by the casting of Will and Jim, the main characters of the story. In the novel, the boys are thirteen years old, going on fourteen. But in the movie they are more like nine or ten years old. That's a big difference in boy years, and I don't think the younger versions of Will and Jim fit the story very well. After that initial disappointment, I don't think I was willing to give the rest of the movie a chance.

But, I admit that I could see it in a different light these days, just like with the novel. I think I should give that movie another try. Perhaps.

Maybe I will watch it with my son.
Posted by Albatross at 7:08 PM 2 comments:

Keeping people from riding on top

Sometimes all you need to solve a particularly pesky problem is a solution as low-tech as balls and chains. And very smelly, messy brooms.

JAKARTA, Indonesia -- Indonesia has another bizarre way to keep commuters off the roofs of trains: swat them with brooms drenched in putrid goop.

Indonesia has tried just about everything to keep passengers from clamoring atop trains that crisscross its main island of Java: spraying them with paint guns, calling in sniffer dogs, and asking for help from Muslim clerics.

The first tactic that worked was deployed last month.

Grapefruit-sized concrete balls were suspended on chains from a frame that looks like a soccer goal. "Rail surfers," realizing they could be knocked in the head or even killed, quickly called it quits.

Buoyed by that success, railway officials decided to try the brooms as well.

Sujadi, who didn't disclose the ingredients of the smelly goop, said he was unaffected by criticism for all the strange and strict security measures.

"Some people say its inhumane, but that's fine," he said. "Because letting them ride on the roofs is even more inhumane."

I call it tough love.
Posted by Albatross at 8:46 PM No comments:

Domitian had a ruddy complexion; large, rather weak eyes; and a modest expression. He was tall and well-made, except for his feet which had hammer-toes. Later, he lost his hair and developed a paunch; and, as a result of protracted illness, his legs grew spindling. He took as a personal insult any reference, joking or otherwise, to bald men, being extremely sensitive about his own baldness ... .


Red-faced, bald, and with ugly feet. It's a wonder he got a wife as good-looking as he did. 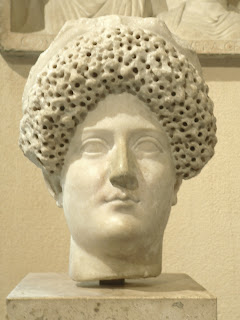 I think my bald husband is jealous.
Posted by Albatross at 9:02 PM No comments:

Throughout the entire struggle [the civil war] not a single Caesarian deserted, and many of them, when taken prisoners, preferred death to the alternative of serving with the Pompeians. Such was their fortitude in facing starvation and other hardships, both as besiegers and as besieged, that when Pompey was shown at Dyrrhachium the substitute for bread, made of grass, on which they were feeding, he exclaimed: 'I am fighting wild beasts!' Then he ordered the loaf to be hidden at once, not wanting his men to find out how tough and resolute the enemy were, and so lose heart.


That is pretty hard-core, though I suppose Pompey could have used the same loaf of grass bread to demonstrate to his soldiers how close the Caesarians were to defeat. After all, how much longer can an army of men keep fighting with nothing more than grass to sustain them? They would eventually weaken, and as long as the Pompeians had adequate supplies they would be sure to prevail. Eventually.

But Pompey didn't prevail. He lost in the end, and Rome was won by Julius Caesar, to be transformed from a republic into the new Roman Empire, ushering in a new age of complete, dictatorial, tyrannical domination of the world's greatest power at the time. 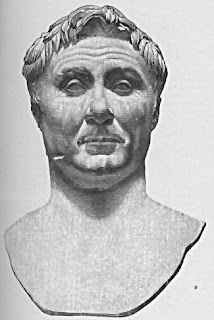 Well, what did you expect? They were eating grass, for Pete's sake!
Posted by Albatross at 5:28 PM No comments: