Schooling from the Punisher: alternate pronunciations 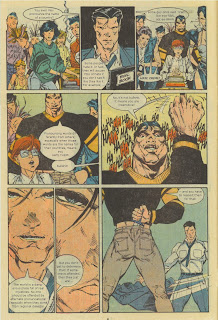 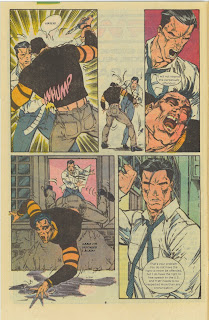 Inspired by this news story about Hamed Haddadi.

Smith: “He’s the first Iranian to play in the NBA.” (Smith pronounced Iranian as “Eye-ranian,” a pronunciation that offended a viewer who complained.)

Lawler: “There aren’t any Iranian players in the NBA,” repeating Smith’s mispronunciation.

Where do YOU store your potatoes?

.
A blog I check out from time to time is Sorry I Missed Your Party, the proprietor of which (Party Pooper) skims through Flickr photo threads and posts some very interesting images of people having fun at parties. On Thanksgiving 2009, Party Pooper posted this picture: 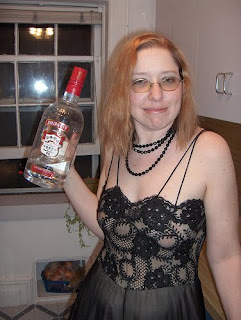 According to the information on the Flickr thread, that's a picture from an Oscar-night party in New York in 2005. OK, it's a party, so here's this woman in an sheer top holding a mostly-empty bottle of vodka and not looking like she really cares who won the Oscar for Best Scoring for a Video Game Turned Into a Movie. What's so odd about that?

Nothing. Until you look behind the woman.

And then you will see ----- what the hell is that little cubby-hole cut into the wall right at floor level? And what's inside? Potatoes!?!

My God, who does that to their house and thinks it's actually a smart way to store your root vegetables? Or who moves into a house with that feature and decides to continue using it rather than immediately covering it over with a patch and some new paint? I mean, jeez, at least put a little door on that thing so your guests (and everyone else checking out this Flickr thread) don't have to watch your forgotten vegetables start taking root.

Believe me, people at parties notice these kinds of things.
.
Posted by Albatross at 8:16 PM 3 comments:

The future is here

Smart armor being developed by scientists and engineers at U.S. Army Tank Automotive Research, Development and Engineering Center in Michigan can not only predict its own failure, but also identify the size of bullets shot at it and even generate electrical power upon impact.

Each plate of armor, whether its [sic] wrapped around a soldier's body or vehicle's chassis, has two piezeoelectric sensors attached to it.

An electric current flows into one sensor and turns it into mechanical energy in the form of a tiny vibration that ripples through the armor plate. The other piezoelectric device takes that mechanical vibration and turns it back into electrical energy.

Anywhere from five to 15 volts of electricity is pumped into, and out of, an intact plate of armor. If the armor has been damaged by bullets, shrapnel or anything else, some of the current released into the armor won't be picked up on the other end.

By measuring just how much energy is lost, the TARDEC scientists can determine how damaged the armor is.

As on Earth, electrical fields above Saturn interact with atmospheric chemicals to produce shimmering lights above the polar regions.

Saturn's flicking polar lights dance higher above the planet – 750 miles (1,200 km) – than any known aurora in the solar system. They ripple like tall curtains, changing every few minutes, according to a statement today from the space agency.

"The auroras have put on a dazzling show, shape-shifting rapidly and exposing curtains that we suspected were there, but hadn't seen on Saturn before," said Andrew Ingersoll of the California Institute of Technology in Pasadena. "Seeing these things on another planet helps us understand them a little better when we see them on Earth."

Going to the asteroids

BOULDER, Colo. - Call it Operation: Plymouth Rock. A plan to send a crew of astronauts to an asteroid is gaining momentum, both within NASA and industry circles.

Not only would the deep space sojourn shake out hardware, it would also build confidence in long-duration stints at the moon and Mars. At the same time, the trek would sharpen skills to deal with a future space rock found on a collision course with Earth.

In Lockheed Martin briefing charts, the mission has been dubbed "Plymouth Rock — An Early Human Asteroid Mission Using Orion." Lockheed is the builder of NASA's Orion spacecraft, the capsule-based replacement for the space shuttle.

Send astronauts, by all means. But leave the miners at home. They're more trouble than they're worth.
.
Posted by Albatross at 8:43 PM No comments:

Water on the moon

It's official: There's water ice on the moon, and lots of it. When melted, the water could potentially be used to drink or to extract hydrogen for rocket fuel.

Lot's for us to drink when we get there, let's hope!
.
Posted by Albatross at 4:53 PM No comments:

Wrong word choice for a headline

What, did they all go on break at the same time?
.
Posted by Albatross at 9:12 PM No comments:

"This is not junk mail."

I didn't ask for it. You sent it. It's trying to sell me something. It's junk mail.
.
Posted by Albatross at 9:02 PM No comments:

What I did today 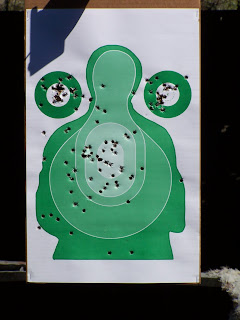 And here's what I used to make those holes. 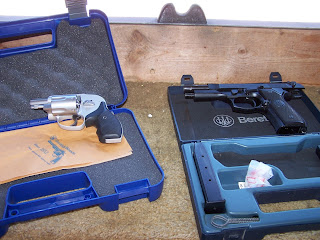 All the holes in the middle were center mass firing with both weapons. Sometimes one shot, sometimes two, sometimes with a holster draw.

I had a great time. It's been a while since I've had the chance to squeeze off some rounds and not have to worry about being anywhere afterward, so it was quite relaxing.

And the most amazing part about this morning's exercise? I seem to be better at shooting left-handed, even though it feels absolutely strange to shoot that way.

.
Specifically the possibility of extraterrestrial life in that space.

The Catholic Church seems to think so.

[J]ust as the Church eventually made accommodations after Copernicus and Galileo showed that the Earth was not the centre of the universe, and when it belatedly accepted the truth of Darwin's theory of evolution, Catholic leaders say that alien life can be aligned with the Bible’s teachings.

Father Jose Funes, a Jesuit astronomer at the Vatican Observatory ..., said: "As a multiplicity of creatures exists on Earth, so there could be other beings, also intelligent, created by God.

"This does not conflict with our faith, because we cannot put limits on the creative freedom of God."

The occasion for the comments is a conference on astrobiology being held by the Vatican. Interesting stuff, plus some pretty funny photo art at the link.
.
Posted by Albatross at 9:35 PM 2 comments: 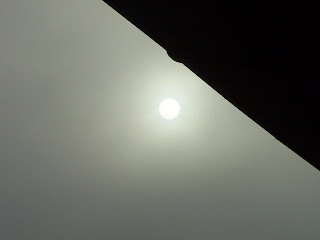 Nothing but our dear old sun doing its best to peek through the fog on a dreary morning.
Posted by Albatross at 8:22 PM No comments:

.
Will wonders never cease? Now it seems that our solar system's most sun-drenched planet may actually have seasons! Just like on Earth.

Mercury's atmosphere is what scientists call an "exosphere," and is made up of atoms kicked up from the surface. It is very tenuous and has a very low density, meaning atoms in the atmosphere rarely run into each other. It also has a tail that streams away from the planet in the opposite direction of the sun.

MESSENGER looked at differences in three atoms in the exosphere — sodium, calcium and magnesium — between the probe's three flybys. They detected much less sodium during the third flyby than they had during the second.

"While this is dramatic, it isn't totally unexpected," [mission scientist Ronald Vervack, Jr., of The Johns Hopkins University Applied Physics Laboratory] said. This is because radiation pressures from the sun change as Mercury moves through its orbit, which changes the amount of sodium liberated from the surface.

Not quite like the changing leaves and cold fronts we are used to, but pretty interesting nonetheless.
.
Posted by Albatross at 6:00 PM No comments: